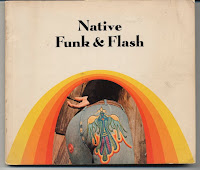 
This delightful book was recently donated to the Grateful Dead Archive by a colleague who spotted it in a local used book store. It is a remarkable book, documenting a rich vein of the Haight-Ashbury counterculture that birthed the Grateful Dead and that they in turn did so much to nurture, shape, and carry on after the neighborhood’s demise. Its well-illustrated pages document textile art in the Haight-Ashbuy and throughout the broader hippie world in Northern California, focusing on embroidery, quilting, and clothing. Jacopetti’s story is an important entry in the literature on the Haight and its diaspora: married to well-known Haight habitué Roland, later Ben, Jacopetti, she documents an important feature and legacy of the Haight, clothing art.

Though not a memoir, Jacopetti recounts some of her own experience in the Haight, mentioning the Trips Festival, watching Bill Graham “get the Fillmore together” (7), and spending time at famed hippie commune Morningstar Ranch. And most of the artists and works featured in the book have Haight-Ashbury connections, some notably so, such as Alton Kelley, Patti Towle, Lynne Hughes, Tom Donahue, Mari Tepper, and Ben Van Meter.

But the book does not celebrate the Haight’s elite: in classic hippie fashion, it celebrates the democratic urge toward decorative dress, documenting the art of transforming mass-produced clothing like blue jeans through embroidery, beadwork, and patchwork, making them personal and expressive; and carrying that instinct through waves of learning, practice, and study, culminating in exquisite mastery. That is one of one of the most difficult aspects of the Haight-Ashbury milieu to convey, and this book captures and expresses that attitude, philosophy, and continuum, directly and indirectly, often within a single paragraph:

There aren’t any patterns in this book because the patterns are all within, languishing and longing, like dreams, for expression. Don’t be daunted by lack of skill or technique; there are scores of books and several friends who can teach you French knots or chain stitch and, God knows, we’ve lost a lot of other skills since Grandma’s day. Many of the pieces here are amateurish by her standards, but do heed the message from within, and try to break through the channel of these visual images. (12)


The author’s selection of images is equally measured, with some pieces startling in their sophistication and achievement, others whimsical, a few crudely delightful. 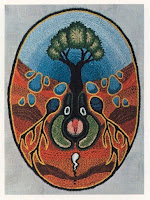 Jacopetti’s text is as important as the pictures. Her description of her participation in the Haight’s craft movement reveals a thoughtful, educated reflection on the ideals, philosophy, and worldview that defined so many of the themes of the 1960s. And she describes her own development as an embroidery artist, demonstrating her sophistication in weaving, textiles, and fabric, an illustration of another often-overlooked aspect of the Haight, which was an old-fashioned drive for excellence. She discusses textile art and fabric construction precisely, but they never undercut the broader hippie ethos; when she explains denim’s construction, it is to provide a way of understanding its qualities as cloth lend itself to embroidery, moving easily from the technical details of her craft to its hippie embodiment:

The white weft threads were just showing through the faded surface warps—that nice denim depth of blue-on-white is achieved in just that way. Embroidering a fantasy flower on Roland’s elbow was discovering a new dimension in an old favorite. Denim holds a needle without fraying and pulling. (7)


Jacopetti has enough of the prankster to leaven the seriousness with humor, and even those asides can be significant. Next to a full page photograph of a beautifully embroidered swath of denim featuring a man, flying in a plume of smoke rising from a joint in an ashtray, she writes:

All those people who took acid in the sixties are ten years older now. I remember wondering what would happen when we got older and began to form our own culture, infiltrating the old one by ingenious drug-crazed peace-and-love tactics. (21)


But fundamentally, what Jacopetti’s book reminds readers is the degree to which the Haight-Ashbury’s mosaic of beliefs and expressions did combine to form a worldview that has much to commend it, and whose achievement can be measured in so many of its arts, not only the music and poster art but also the singular, the perishable, the folk.

Cultural historians will find a wealth of useful detail in the book. She is quick to acknowledge the influence of the hippie trail, noting that hippies would buy clothes and crafts abroad for resale; shots of hippie street vendors note that “Some stuff has been brought back from travels across the borders and the seas, but much of it is home-grown” (91). But the importance of those travels and experiences she makes plain at the outset of the book, writing:

Many of us have hungered for a cultural identity strong enough to produce our own versions of the native costumes of Afghanistan or Guatemala, for a community life rich enough for us to need our own totems comparable to African or Native American masks and ritual objects. (5)


That quintessentially American contradiction, that emblematic expression of the Haight’s democratic, yet elite, worldview, is what confounds so many critics; it is the core of the challenge underlying so much of the difficulty of assessing the Haight and the lingering image it etched on the retina of American history and culture.

Historians have bemoaned the difficulties of studying the counterculture, in part for the lack of good archives and scholarly library collections. Books like Native Funk and Flash are a reminder that these resources do exist; and more importantly, that a topic like the counterculture requires historians to adapt their skills to assay a brief, small press publication with the same kind of open-minded acuity that Robert Darnton called for in his landmark cultural history, The Great Cat Massacre, where he famously remarked, “We constantly need to be shaken out of a false sense of familiarity with the past, to be administered doses of culture shock. There is no better way, I believe, than to wander through archives” (4). Scholars of the 1960s, the counterculture, and the Dead need to expand their notion of archives to include the ephemeral, the uncollected, the obscure, just as the hippies of the Haight celebrated their own exploration of those forgotten cultural byways.

This may seem like a lot to hang on a slender, pretty book. But how we treat such texts is a fundamental expression of the work of a scholar or archivist. Where critics only saw dilettantism or even a kill-your-parents nihilism in the Haight’s appreciation for lost or hidden wisdom, there is at heart a powerful intellectual core to that stance. One of the defining aspects of the Haight was the belief that everyone could contribute something artistic, something individual, to the stew; as Mickey Hart remembers:

What I remember best about the Haight was the incredible feeling of creativity. Everybody was an artist, whether they had a craft that our culture would recognize as 'art' or not. Everybody was high with the spirit of adventurous exploration; everybody was busy becoming new. (Drumming at the Edge of Magic, 133)


While the bands and the poster artists are the most obvious artistic legacies of the Haight, what participants also remember is the dazzling array of arts and crafts that defined that foggy little neighborhood adjoining Golden Gate Park and energized its participants into making community. Jacopetti’s book is one of the rare documents of that broader ethos, and the Archive is most grateful to our colleague and friend, Librarian Josh Alper, for making this gift.
Posted by Grateful Dead Archive at 11:34 AM
at 2:33 PM