Comments on "Art Brut and Ego" by Theresa Anderson. Theresa is a painter, critic, gallerist and historian.

I was reading about Paul Thek this morning. Body of Influence, Six Views on Paul Thek Mike Kelley in the latest issue of ArtForum. I’m not sure I had ever really looked at his work before but, I was intrigued by the descriptions given about his work. Much of my work looks very dissimilar to his but his attitude is strickingly similar. I did a little more research on the web and quickly came up with this post in wikipedia listed below. Not the best reliable resource but does the quick and dirty.

Loved this quote by Jean DuBuffet. quick research on outsider art asposted by wikipedia. “French artist Jean Dubuffet was particularly struck by Bildnerei der Geisteskranken and began his own collection of such art, which he called art brut or raw art. In 1948 he formed the Compagnie de l’Art Brut along with other artists, including André Breton. The collection he established became known as the Collection de l’Art Brut. It contains thousands of works and is now permanently housed in Lausanne, Switzerland. Dubuffet characterized art brut as: “Those works created from solitude and from pure and authentic creative impulses – where the worries of competition, acclaim and social promotion do not interfere– are, because of these very facts, more precious than the productions of professionals. After a certain familiarity with these flourishings of an exalted feverishness, lived so fully and so intensely by their authors, we cannot avoid the feeling that in relation to these works, cultural art in its entirety appears to be the game of a futile society, a fallacious parade.” – Jean Dubuffet. Place à l’incivisme (Make way for Incivism). Art and Text no.27 (December 1987 – February 1988). p.36 Dubuffet’s writing on art brut was the subject of a noted program at the Art Club of Chicago in the early 1950s.

Dubuffet argued that ‘culture’, that is mainstream culture, managed to assimilate every new development in art, and by doing so took away whatever power it might have had. The result was to asphyxiate genuine expression. Art brut was his solution to this problem – only art brut was immune to the influences of culture, immune to being absorbed and assimilated, because the artists themselves were not willing or able to be assimilated.”

I guess there was a time I might have been considered an outsider artist but, now that I am pretty immersed in theory I am pushing back or trying to wade through a lot of market junk. Well, the end of the year top ten lists don’t help my attitude much. I can’t help but think how there are a lot of really good artists who don’t get much help from the market structure. Someone’s got to believe in you in order for someone else to believe in you. Alice Neel said one of her big regrets was to have put her paintings up on shelves. It is risk taking supreme and probably what separates true outsider artists from Art Brut. Well, I’ve started the new year on a good path. During my residency at Platteforum I tried to let out the ego and just go with the rawness or artmaking and the experience I could create with whatever materials were available. I’m going to continue to walk on that tightrope of trying to make good, intense, true art that stays true to why I want to be an artist. New Years resolution. NO EGO JUST ART. 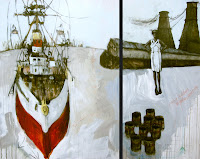