Tom Carnegie: Voice of the Indianpolis Motor Speedway, dead at 91

The golden voice of the Indianapolis 500 is now quiet. Tom Carnegie died today at a health care facility in Zionsville. He was 91. 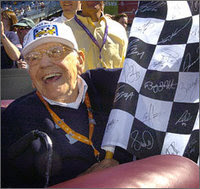 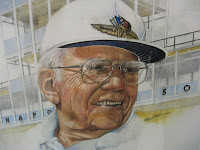 Carnegie began working as Indianapolis Motor Speedway’s lead announcer in 1946, a career spanning six decades. His deep, measured voice was iconic even among the icons of auto racing. “He’s one of those personalities where you wish time would stand still so he could be forever with us,” 1969 race winner Mario Andretti once said. A longtime Zionsville resident, he is survived by his wife of more than 60 years, D.J., and their three children, Blair, Charlotte and Robert.


Carnegie wasn’t a Hoosier -- he was born Carl Lee Kenagy in Norwich, Conn. -- but he became synonymous with the state and its capitol city. The son of a Baptist minister, Carnegie was sports director of the old radio station WIRE before taking the same position with WFMB-TV (which became WRTV-6).

Until 2007, when he helped call his final 500, he seldom missed a day in May at the Speedway. For fans and competitors, it wasn’t a day at the track until he said “Good morning, race fans” across the loud speakers. Two of Carnegie’s sayings will live forever in the hearts of race fans: “Heeee’s on it” in describing the start of an official qualifying attempt; “It’s a newwww track record.” But his life wasn’t just race cars. For years he called the Indiana high school basketball State Finals, including the 1954 Milan victory that inspired the move “Hoosiers.” 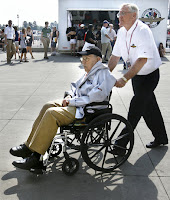 Carnegie’s career started at a Fort Wayne radio station in 1942, but he was soon invited to work in Indianapolis by The Star’s former publisher, Eugene C. Pulliam. He was announcing an antique auto show when the late Tony Hulman asked him to do the same for the 500 that he was resurrecting in 1946. Carnegie said he never got a contract to work at IMS, and for 20-some years he didn’t get paid. “I just showed up every year,” he often said. Carnegie is a member of the Indiana Basketball Hall of Fame, the Indiana Associated Press Hall of Fame and the Indianapolis Motor Speedway Hall of Fame, to name a few. Carnegie’s stature reached beyond the racing world.

During a luncheon today introducing new Indianapolis Indians baseball manager Dean Treanor at the new JW Marriott, emcee Mark Patrick informed the crowd of Carnegie’s death, then called for a moment of silence. “He is one of the true legends of our lifetime,” he said.
at 1:49 PM