Dorothea Rabkin, who with her husband built a collection of American folk art noted for the whirligigs and other sculptures made by anonymous carvers in the 19th and early 20th centuries, died on Nov. 25 at her home in Manhattan. She was 87. The cause was complications of Parkinson’s disease, her husband, Leo Rabkin, said. Starting not long after their marriage in 1958, the Rabkins spent decades scouring flea markets and secondhand shops. 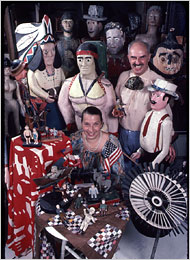 They acquired some traditional pieces like quilts and baskets, but they also bought objects few people wanted then — the works by unschooled artisans that are known today as outsider art. Their collection grew to more than 1,200 items, including paintings by self-taught black artists like Sam Doyle and Mose Tolliver. But the Rabkins were best known for figural folk sculpture, amassing one of the finest collections in private hands. Most often carved in wood, sometimes made of metal, the sculptures are typically human in form, depicting men and women at work and at play. Besides whirligigs, articulated pieces designed to move or spin in a breeze, they include tradesmen’s mannequins, ventriloquists’ dummies and dolls. Artwork from the Rabkins’ collection has been reproduced widely in books and exhibited around the country.


More than 200 of the couple’s pieces are now in the collection of the American Folk Art Museum in New York. One of the most instantly recognizable is the whirligig “Uncle Sam Riding a Bicycle,” among the most emblematic works of American folk art of any kind. Nearly five feet long and carved of wood, it was made between 1880 and 1920. When a propeller at the front is turned, Uncle Sam, in top hat and tails, pedals his little bike. Behind him, a richly carved American flag (the reverse side is Canadian) seems to ripple in the breeze. Among other notable objects the Rabkins gave the museum is an elaborate sheet-metal farm scene from the early 20th century that, set in motion, is almost Rube Goldbergian in its symphony of contingencies: a man pumps water, and a horse drinks it; a fisherman pulls on his rod as a chicken steals a worm from his bait can. As associates said in interviews this week, Ms. Rabkin had a keen eye for unheralded talent. (She was an early advocate, for instance, of the Pennsylvania folk painter Justin McCarthy.)

From the mid-1980s till her retirement in 2007, she served on the collections committee of the folk art museum, advising it on acquisitions. Dorothea Herz was born in Berlin on June 28, 1921, to a Jewish father and a Gentile mother. The parents’ marriage had long been shaky, Leo Rabkin said this week, and after Hitler came to power in 1933, the mother left the family and repudiated her children. In the years that followed, Dorothea and her twin sister, Rose, were shuttled among sympathetic Christian neighbors, sometimes together, sometimes apart, often hidden in closets. They dared not go to school, and their formal education ended. After the war began, the twins, now young adults, found themselves adrift in Berlin. Living separately and furtively, they and an older sister, Elizabeth, passed as Gentiles. (Dorothea dyed her hair platinum blond, her husband said.) During this period, their father, pursued by the Gestapo, killed himself. Their mother survived the war. Rose made her way to New York in 1948. Dorothea arrived the next year, carrying, as she later said, “an empty suitcase.” She found work as a cook in a Schrafft’s restaurant and was later an assistant to a rare-book dealer. In January 1958, Dorothea met Leo Rabkin on a blind date; they married that May.

A native of Cincinnati, Mr. Rabkin is an abstract artist whose work is in the collections of major museums; for many years he was also a teacher of troubled adolescents at the Livingston School for Girls on King Street in Manhattan. Ms. Rabkin’s older sister, Elizabeth, who remained in Germany, died there in the 1990s; her twin, Rose, committed suicide in the 1970s. Mr. Rabkin is her only immediate survivor. For a refugee, outsider art is a resonantly apt passion; as Ms. Rabkin often said, she was drawn to American folk art by its wit, its character and, above all, its essential democratic roots. She collected fanciful sculptures, of course, like a soulful-looking witch astride a broomstick. But the work she loved best showed everyday Americans in all their humble diversity — sawyers and sailors, wrestlers and card players, Indians and a Mennonite, black men and white — ordinary people, going freely about their lives.
at 10:04 AM