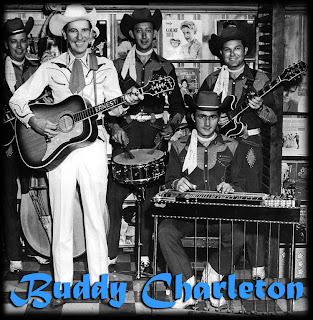 OBITUARY ~ Elmer Lee “Buddy” Charleton, the musician and teacher whose pedal steel guitar work was an integral element in Country Music Hall of Famer Ernest Tubb’s famed Texas Troubadours band, died Tuesday night at his home in Locust Grove, Va. He was 72 and was fighting lung cancer. From the spring of 1962 until the fall of 1973, Mr. Charleton was a featured Troubadour, playing crucial steel licks on Tubb’s classic honky-tonk material and entertaining listeners with imaginative, complex, at times unclassifiable steel guitar flights during Troubadour band sets when Tubb took a break. Tubb’s band endured numerous lineup changes, and Mr. Charleton and electric guitarist Leon Rhodes were the instrumental focus of what Tubb biographer Ronnie Pugh wrote was Tubb’s “greatest band of Texas Troubadours. …

For sheer musical ability they were unsurpassed.” “Buddy was a quiet man, and yet on the steel guitar he stood out like nobody could,” Rhodes said. “I’ve always been able to play very fast, with the good Lord’s help, but a steel guitar player has a bar in his left hand and some picks on his right hand, and it’s not comfortable for him to go 90 miles an hour playing a tremendously fast song. No matter how fast I could play on my guitar, though, Buddy could do it on the steel. He was incredible, and I loved him dearly.” Mr. Charleton is also known for his post-Tubb career as a pedal steel guitar teacher in the Washington, D.C. area. His students became some of contemporary country music’s most accomplished players, including Bruce Bouton (Garth Brooks, Reba McEntire), Pete Finney (Dixie Chicks, Patty Loveless), Bucky Baxter (Bob Dylan), Robin Ruddy (Rod Stewart), Robbie Flint (Alan Jackson), Tommy Detamore (George Strait, Doug Sahm) and Tommy Hannum (Emmylou Harris, Ricky Van Shelton). “He was one of the all-time greats in terms of tone and attack, and by taking lessons from him you had him as an example to look up to, just three feet away from you,” said Finney, one of the handful of musicians who moved to Nashville and became professional players after studying under Mr. Charleton in the 1970s.

Born in New Market, Va., Mr. Charleton broke into the music business while working a day job as a bricklayer. He played on occasion with Patsy Cline in her “Kountry Krackers” band, and Cline recommended him to Tubb, whose steel player, Buddy Emmons, was exiting the Troubadours. Mr. Charleton didn’t have a phone, so Tubb contacted him through a Virginia disc jockey named Eddie Matherly. The next day, the 23-year-old Mr. Charleton flew on an airplane for the first time and joined the Texas Troubadours in Oregon.

He would move to Nashville and become the longest-tenured of Tubb’s classic Troubadours band, with his nimble, jazzy steel work featured on spotlight instrumentals including “Rhodesbud Boogie,” which he co-wrote with Rhodes. Mr. Charleton is featured on numerous Tubb albums, including Live 1965, considered one of country music’s top live albums. He also starred on three Decca albums that the Troubadours recorded without Tubb, and on Tubb’s duet records with Loretta Lynn. “When he was backing Tubb, Buddy would play it really straight,” Finney said. “But in Tubb’s shows, there would always be a band set where he could really cut loose and play country-jazz. All of Buddy’s playing was exquisite.” Fatigued by constant touring, Mr. Charleton ultimately left the Troubadours and relocated to the D.C. area to teach. He spent decades instructing students who sought a master’s advice on playing the notoriously difficult steel guitar. “He was the nicest and most patient man I’ve ever met,” Detamore wrote on The Steel Guitar Forum website. “So soft-spoken and encouraging.” Mr. Charleton’s remains will be cremated. A funeral is being planned, with Johnson Funeral Home of Locust Grove, Va. handling the arrangements.