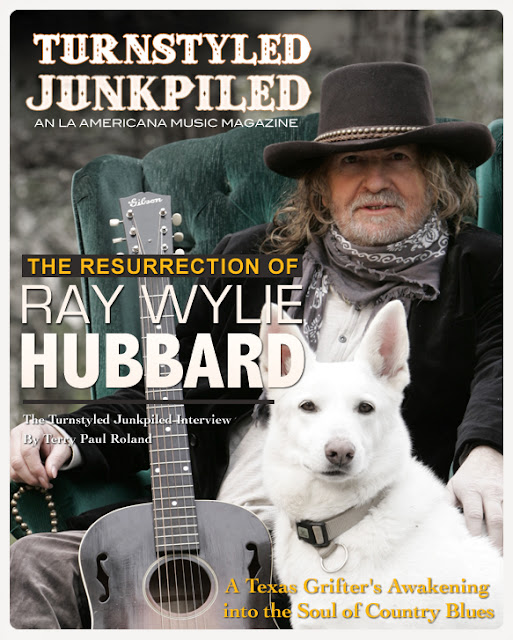 Ray Wylie Hubbard’s  new album, The Grifter’s Hymnal, is like a church service held at the funkiest roadhouse bar this side of the Mississippi. He is at once, a ragged prophet, a profane poet and a lusty preacher. But these days, life for Hubbard is about spiritual awakening, not bible thumping. Unless, that is, the good book can be used purely for his rhythm section.
On songs like the talking blues, “New Year’s Eve at the Gates of Hell,” all boundaries between the sacred and the secular are stomped down by the drive of his resonator and the imagination of his lyrics. The cold iron chains that too often bind poetry to the printed page are loosed under the influence of the Texas journeyman’s plain old hard-ass dirty blues. And as he proclaims on “Down Home Country Blues” from last year’s A: Enlightenment, B: Endarkenment,(Hint there is no C),  “Muddy Waters is as deep as William Blake.”
It’s been four decades since Hubbard made his bones as a Texas Cosmic Cowboy, doing his Country-Rock Boogie in redneck bars and hippie communes around Austin.  But today, he looks more like a desert father, drunk on visions conjured up by his slide guitar, than a country music outlaw. He rides in on his signature style Country-Blues, echoing everyone from John Lee Hooker and Howlin’ Wolf to Bo Diddley and Chuck Berry. But, it is his own musical vision that seduces with percussive acoustic and howling electric guitars.
Hubbard’s sound calls listeners into his circle of fire and keeps them there, ready to dance.  His voice extends from a persona who sometimes seems lost in his own wilderness. A kaleidoscope of hot-blooded Country-Blues, bathed in mysticism, incantations and a deep faith from his 23-year road of sobriety. It has served to allow his musical wakefulness, as well as his eccentricities to roam free on record and live performances.
Ray Wylie Hubbard is a blood brother to Townes Van Zandt, but alive and sober.  His lyrics share the same crazy darkness, but they don’t stop there. He knows suffering and describes it in as much detail as Townes once did. Then, some poetic light comes flooding in from a simple epiphany that could only be born from the clear mind of a sober soul.
On the song “Lazurus,” he sings, “We’re in the mud and scum of things, moaning, crying and lying/at least we ain’t Lazurus and had to think twice about dying.” It is an observation that blows apart the assumptions of the sacred gospel story and brings it into the inevitable common mortality. This plays well alongside the next track, “New Years Eve at the Gates of Hell,” where Hubbard dreams he stands at the entry to the lake of fire. Somehow in the midst of the story, he concludes that Satan is working for God. Then he shouts, “I can’t believe I said that!” 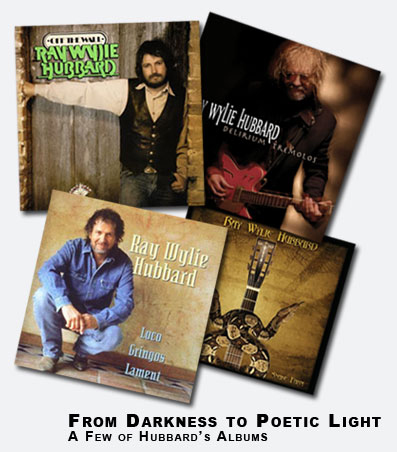 So, how did Ray Wylie Hubbard arrive at this lofty place of esteemed Prophet Bluesman, sometimes referred to as the ‘Wylie Lama?’ The story goes way back.  After graduating as an English major in 1965, he immersed himself in what he refers to as the ‘Cambridge folk singers,” who include Tom Paxton, Dave Van Ronk and Eric Andersen. Although he didn’t come up with a record contract until the early 70’s, he was in Austin before Waylon and Willie were known as Outlaws. Along with high school mates, Michael Martin Murphy and B.W. Stevenson, he helped define the term.
The Outlaw Movement would eventually shake things up in the Country Music establishment by kicking the shit out of the safety of the conservative Nashville sound. The long hair and cannabis were only the tip of the ice-berg. The original Outlaws, including Hubbard, brought a Rock and Roll sensibility into the studio and onto the stage. He became one of the key figures moving from folk music gatherings to honky-tonks, playing anywhere that had electricity and beer. He brought the hippies and rednecks together with the anthem of the time, a throwaway song, “Up Against The Wall Redneck Mother.”
In 1973, knowing only one verse and the chorus, Jerry Jeff Walker called Hubbard from a record session asking for the rest of the words. He said, “Jerry’s version had an intro on it that said, ‘This song is by Ray Wylie Hubbard.’ Now the trouble with irony is that not everybody gets it. So, I’d go and play clubs and people would keep requesting “Redneck Mother.” I was a folk singer and I’d have these other songs I’d want to do. So I finish the song and people would shout, “Sing it again!” Hubbard groaned.
But, with a series of critically acclaimed albums of well-crafted songs over the last two or three decades, it has seemed less of a burden. He plays the song today without reluctance, but he adds a story with it that is worthy Woody Guthrie or Ramblin’ Jack.
Although Hubbard managed to pick up a record contract and recorded albums during the peak of the 70’s Outlaw Movement, his career had little impact beyond Texas. The years that followed, as he describes them, were a blur of drugs, alcohol and a career decline that left him with little hope for being known as anything more than the guy that wrote “Redneck Mother.”
However, as fate would have, whatever higher power resides in the spirit of his music, wasn’t finished with Hubbard. And now, when he talks about his musical bottom, he does so with a chuckle.


“A week before I got sober I had a gig somewhere in Dallas at Charlie’s Airport Lounge where I shared the bill with a lingerie show,” Hubbard said. 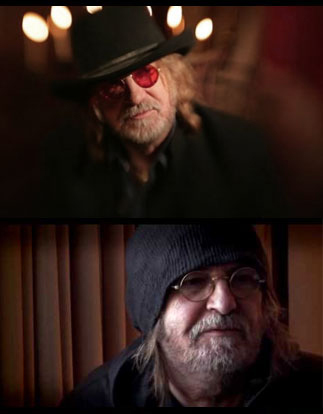 But what felt like the end of the line for an artist known for his honky-tonk outlaw edge, wasn’t. In 1989, through a network of sober musicians, Hubbard talked with legendary blues guitarist, Stevie Ray Vaughn. It was this conversation that would help him rise from the bottom and find a path toward clarity and peace.


“He had 14 months at the time he told me about being sober. I was at the point where I had all the fun I could stand. Stevie Ray was the first guy I knew who got sober and didn’t turn into a square,” Hubbard recalled.

Vaughn proved to Hubbard that being sober could go hand in hand with being a badass. In fact, it would only lead to technical aptitude, enhanced abilities and a new awareness and feeling for his music.


“Stevie told me, ‘Once I got sober, I took off the boxing gloves and I could really play.’ He was right because after a while, I could start to feel again,” he continued.

Through another musician friend in recovery, Hubbard found a renewed interest in learning to finger-pick and absorb Country-Blues guitar. He said the guy knew how to play like Doc Watson and Chet Atkins. Hubbard remembered seeing Lightnin’ Hopkins during the 60’s and wanted to play like him. He became a student of Texas blues guitar. Through his sobriety, he also became a student of life. 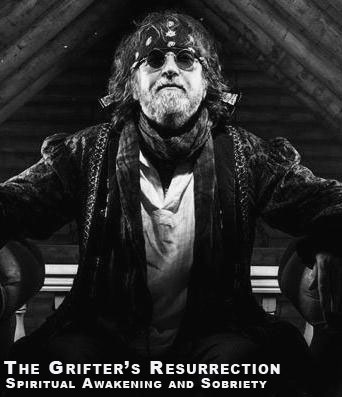 In 1990, Steve Ray Vaughn’s life came to a tragic end in Washington D.C. when his helicopter crashed while he was on tour with Eric Clapton. The effect this had on Hubbard as a human being and an artist has been profound. He dug deeper into his roots and became a better songwriter.


“Because of him, I started doing the deal. I still think of him every day. He took the time to tell me what happened, what it had been like before and how it was for him after. At that point I didn’t have any faith. I got a little hope though. After about a year, I wanted to be a real songwriter,” he explained.

Since Stevie Ray’s death, Hubbard’s music has become increasingly drenched in Country-Blues. His lyrical and musical abandon has been powerful enough to rank him with the best of today’s singer-songwriters. His songs are personal and universal with lyrics that spin stories and his describe his own self-styled philosophy with a sense of irony and humor all his own.
He’s also thought of as one of Americana music’s elder statesmen, which affords him the freedom to enjoy being who he is and playing the music the way he feels it. As he talks about his life over the last 23 years, he does so with a sense of pride in his voice.


”I came from that airport lounge to having a fucking Beatle on my album,” Hubbard said. 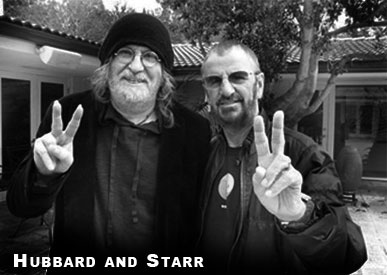 With little fanfare, Ringo Starr makes an appearance on Grifter’s Hymnal. Hubbard said he talked with Ringo recently and mentioned his love for the drummer’s song “Coochy, Coochy,” from the 1973 country album, Beaucoups of Blues. Hubbard decided to record it for his new album. Ringo liked his version so much, he added guitar, shakers and hand claps on the track. But in the spirit of who Ringo is as a person, it makes sense that there isn’t some special highlight on the album about his appearance.
“We didn’t put a sticker on the CD with his name on it because it would negate the vibe of the album. Ringo is also in recovery. He’s such a great musician and really loves other musicians. He treats everybody the same,” explained Hubbard, who met Starr at a party.
His impression of Ringo was of a musician’s musician who felt a sense of equality to his friends and peers. Even during the previously mentioned star-studded party, Starr related to Hubbard in the same way he talked with a former band mate.


“He was talking to me one minute and the next he was talking with Paul McCartney and there was no change in his attitude toward either of us. If I put his name above everybody else, it would make the other musicians less important. So, I figured rather than putting his name up there, I’d let people discover it,” Hubbard said. 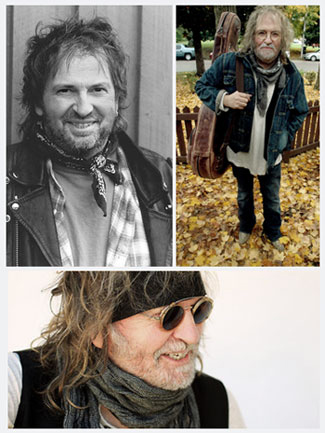 There’s plenty to discover in Hubbard’s body of work. From 1992 with the rockabilly infused Lost Train of Thought and moving through the grittier series of albums up to Grifter’s Hymnal, through his sobriety and spiritual awakening, he has created a legacy that could have been lost in the fog of self-destruction. Instead, today he is considered one of the most important elder statesmen of real Country Music, that today is known as ‘Americana.’
“Now, I’m so grateful. It’s kind of weird. When I first got sober, I thought my life was over. I mean, I couldn’t even drink a beer. I had no way of knowing my life was just beginning. Once I got in there, I realized what this is about. I’ve got a good life today. I got a career, a wife and an 18 year-old son who’s also playing blues guitar,” Hubbard concluded with a sense of awe.
For Ray Wylie Hubbard, rather than losing anything sobriety gave him a new edge and feeling for his music. With one ear to Howlin’ Wolf and the other to William Blake, Hubbard’s take on country blues continues to a grizzly depth with each new album release. This Pilgrim Grifter’s progress will continue to engage his listeners and challenge new artists to re-think their assumptions about life as a sober songwriter and musician.