There is a solution for reducing street crime AND improving the lives and self-esteem of hardcore addicts. Sensible and monitored programs of drug legalization works and the community is better off for it.

VANCOUVER, British Columbia — Dave Napio started doing heroin over four decades ago, at 11 years old. Like many addicts these days, he heads to Vancouver’s gritty Downtown Eastside neighborhood when he needs a fix. 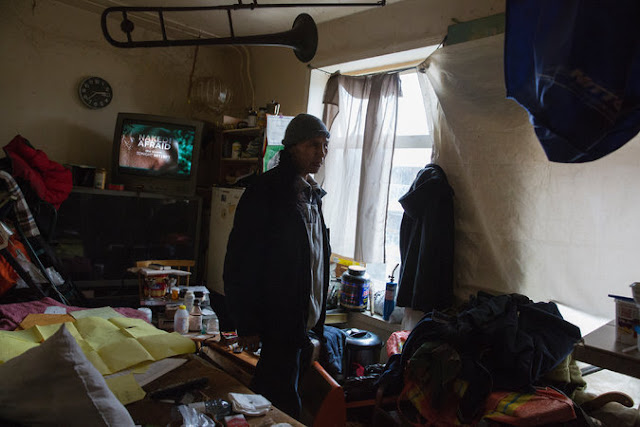 But instead of seeking out a dealer in a dark alley, Mr. Napio, 55, gets his three daily doses from a nurse at the Crosstown Clinic, the only medical facility in North America permitted to prescribe the narcotic at the center of an epidemic raging across the continent.
And instead of robbing banks and jewelry stores to support his habit, Mr. Napio is spending time making gold and silver jewelry, hoping to soon turn his hobby into a profession.
“My whole life is straightening out,” Mr. Napio, who spent 22 of his 55 years in prison, said during a recent interview in the clinic’s mirror-lined injection room. “I’m becoming the guy next door.”
Mr. Napio is one of 110 chronic addicts with prescriptions for diacetylmorphine hydrochloride, the active ingredient in heroin, which he injects three times a day at Crosstown as part of a treatment known as heroin maintenance. The program has been so successful at keeping addicts out of jail and away from emergency rooms that its supporters are seeking to expand it across Canada. But they have been hindered by a tangle of red tape and a yearslong court battle reflecting a conflict between medicine and politics on how to address drug addiction.
The clinic’s prescription program began as a clinical trial more than a decade ago. But it has garnered more interest recently as a plague of illicit heroin use and fatal overdoses of legal painkillers has swept across the United States, fueling frustration over ideological and legal obstacles to forms of treatment that studies show halt the spread of disease through needles and prevent deaths.
Canada and some European countries have long permitted needle exchanges and monitored injection sites. Prescription programs like Crosstown’s, for addicts whom replacement drugs like methadone do not seem to help, have been available for years in Britain, Denmark, Germany, the Netherlands and Switzerland. All these countries have reported significant decreases in drug abuse, crime and disease.
But such programs have been stymied in the United States, where overdoses have lately led to 125 deaths per day, by concerns that they would encourage illicit drug use. In February, the mayor of Ithaca, N.Y., was criticized by some Republican officials, rehabilitation professionals and police officers after he proposed to establish the country’s first supervised injection facility.


The authorities in Vancouver, a bustling metropolis on the coast of British Columbia, say they turned to such programs after more traditional criminal justice approaches failed to stop rampant illegal drug use and sales on the Downtown Eastside, a poor neighborhood notorious for addiction and crime. “We tried to arrest our way out of it and that didn’t work,” Sgt. Randy Fincham of the Vancouver Police Department said. “Clogging up our courts and jails was not the solution.”
The city started, in 2003, with North America’s first legal injection facility, InSite, which currently serves around 800 people each day. The addicts bring their own drugs, and InSite provides clean needles and medical supervision. The organization has recorded no fatal overdoses on its premises, and said overdoses near the facility have decreased by 35 percent since 2003, compared with a 9 percent decrease throughout Vancouver.
More broadly, a study by the British Columbia Center for Excellence in HIV/AIDS found that people who use safe injection sites are 30 percent more likely to enter detox programs and 70 percent less likely to share needles.
Legal injection sites do not, however, address the thefts, prostitution and other criminal behavior that participants often rely on to finance their addiction. And heroin sold on the street is often combined with — or surreptitiously replaced by — fentanyl, an opioid up to 50 times as potent that was a cause or contributing factor in 655 deaths across Canada from 2009 to 2014, according to the Canadian Center on Substance Abuse.
Participants in the Crosstown prescription program do not have to worry about the purity of their drugs.
To get a diacetylmorphine prescription from the clinic, patients must have participated in two earlier clinical trials on heroin maintenance, whose eligibility requirements included more than five years of injecting opioids and at least two failed attempts at replacement therapy, one of which with a treatment such as methadone.


The first trial, known as the North American Opiate Medication Initiative, followed users from 2005 to 2008, and found that prescribing diacetylmorphine could save an average of $40,000 in lifetime societal costs per person compared with methadone treatment. The second trial, whose results were published this month in The Journal of the American Medical Association Psychiatry, found that injectable hydromorphone, a licensed pain medication, can be as successful as diacetylmorphine in treating a chronic opioid addiction.
But advocates say that some addicts cannot tolerate the side effects of hydromorphone, and worry that anything but heroin itself would send them back to the streets.
The diacetylmorphine prescription program is one of several addiction-treatment services at Crosstown, a squat gray clinic that opened in 2005. The publicly funded program costs about 27,000 Canadian dollars, or $21,000, per addict per year. (The Journal of the Canadian Medical Association published a study in 2012 that estimated that an untreated, severe opioid user costs taxpayers at least $35,000 a year in medical care, jail and other expenses.)


Patients can visit the clinic up to three times a day, from 8:30 a.m. to 4 p.m. They enter through a security door and fill a white-walled waiting area before taking seats in the injection room, where nurses give them a needle and an average dose of 200 milligrams of diacetylmorphine. The process takes a few minutes, but the effect is profound.
“We’ve seen people make dramatic changes in their lives,” said Dr. Scott MacDonald, the clinic’s lead physician. “They don’t have to hustle or do sex work anymore, and some are now able to go to school or work. It’s very rewarding.”
Larry Love, 65, a gray-haired, jovial former oil rig worker, said he started using heroin at 13. Decades of addiction destroyed his marriage and relationships with his children. A $350,000 inheritance he received in the 1990s vanished in less than four years.
Diacetylmorphine, he said, has opened up a path back to normalcy. He compared it to the insulin injected daily by diabetics: just a drug he needs to stay alive.
“It’s 100 percent about stability,” he said. “Now I have money in my savings account and can get a haircut whenever I want. I’ve even started investing.”
Advocates have long wanted to extend heroin maintenance beyond the small group of patients at Crosstown, but they face formidable bureaucratic hurdles and a continuing court fight.
In 2013, Canada’s health minister, a member of the Conservative Party, sought to put in place regulations that would ban the prescription of heroin and other illegal drugs outside of a clinical trial, reflecting the party’s broad opposition to harm-reduction policies.
Five Crosstown patients and the Providence Health Care Society, which runs the clinic, filed a case with the Supreme Court of British Columbia to block the move, arguing that the federal regulations violated a constitutional right to lifesaving treatment. A Supreme Court justice granted an injunction in 2014 that allowed current patients to continue receiving prescription heroin until the constitutional challenge could be heard. A court date is set for October.
At Crosstown, patients continue to try to repair their fractured lives.
Liane Gladue, 48, was a seventh-grade teacher and a married mother before she started shooting heroin two decades ago. She said she could not quit, and spent her waking hours shoplifting and committing other crimes. But since joining the clinical trials and Crosstown’s program, she said, she has reconnected with her grown children.
“When I wake up and think about what I’d have to do for heroin, I feel so lucky to be in this program,” she said. “Now I can do some healing.”