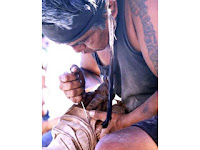 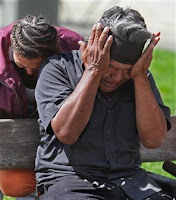 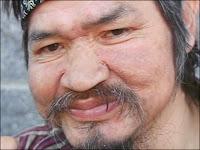 Seattle police slay Native woodcarver and an outraged community is asking, why?
By Terri Hansen

SEATTLE – The police shooting of a talented, aging Native totem carver has sparked anger and outrage in Seattle’s Native community, and beyond. John T. Williams, long time Seattle resident and a Ditidaht member of the Nuu-chah-nulth First Nations of Canada’s Vancouver Island, was shot four times and killed Aug. 30 by police officer Ian D. Birk, a two-year veteran of the Seattle Police Department. Police said Williams advanced towards Birk when the officer spotted him sitting on a ledge with a knife and shouted three commands at him to drop it. As eyewitnesses came forward with a different version of events police then said Williams was crossing an intersection with a knife and piece of wood in his hands, refused to drop the knife and advanced towards the officer. “His body stance did not look threatening at all,” an eyewitness told The Seattle Times. “I could only see the gentleman’s back, and he didn’t look aggressive at all. He didn’t even look up at the officer.” Williams died between 1811 Eastlake, a private nonprofit home for chronic drinkers where he’d lived off and on, and the Pike Street Market in downtown Seattle, where he sold his carvings. Williams was crippled with arthritis and hobbled more than he walked, Randy Lewis, a leader of the United Indians of All Tribes Foundation said. He was capable at most of turning towards the officer when he heard him shouting, to show him what he had in his hands. That’s if he heard him shouting. Williams’ friends say he was deaf in his left ear from an infection eight years ago. Seattle police now say they don’t know exactly what happened. Seattle Police Chief John Diaz told reporters he has “a lot more questions than answers.” What is known is that Birk exited his patrol car, shouted out commands and then fatally shot Williams in the span of a minute. The officer’s in-car video caught part of the incident. The tape has not been released to the public. The folding carving knife carried by Williams had a three-inch blade, legal to carry in Seattle. The city’s code states a dangerous knife is one having a blade three and one-half inches or more. Locals have honored the Williams family for more than 100 years for their traditional carvings, and for making and selling them at the street level and in galleries. He was a seventh generation master carver who carried his carving tools with him, and carved in public. “It’s a great cultural ignorance for (the police department) even to admit they weren’t familiar with their carving with knives on the street (because it’s) not unusual,” said family friend Storme Webber, Aleut. 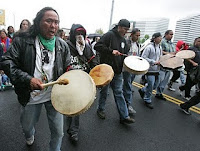 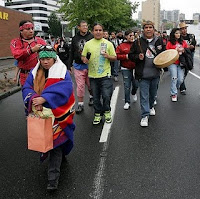 Diaz pledged a complete and transparent investigation by homicide detectives, as well as a firearms review board to determine whether Birk followed department policy. Even so, “a whole lot of governmental process doesn’t bring a loved one back, we do recognize that,” Sean Whitcomb, SPD spokesperson said. The shooting “is not the outcome that anyone wanted, this entire event is very tragic. “We recognize that as difficult as it is we ask that concerned citizens place some faith in this process that will unfold, Whitcomb said. “That process is the investigation process of our own department, as well as the inquest by the prosecuting attorney’s office.” The Chief Seattle Club called on Deputy Chief Nick Metz, in particular, to apologize for comments he made about Williams at a press briefing Aug. 31. “Metz was trying to paint a picture of him in a negative light, like he was trying to rationalize or justify what happened,” said Jenine Grey, Tlingit, of the Chief Seattle Club, a private nonprofit service agency for Native American and First Nations people, where Williams was a member. “Those are very common charges that homeless people face.” Grey said finding a place to urinate other than a gutter is a complicated thing for the homeless. “No one, restaurants or other public places, wants to let homeless people in to use their bathrooms. Nor can they afford to sit in a restaurant or bar when they want to have a drink.” Williams had 30 arrests in 20 years, most for drinking in public and indecent exposure. Fern Renville, Sisseton Wahpeton, managing director of Native youth theater group Red Eagle Soaring said the pitiful language coming from the police department “doesn’t describe the man that I knew – kind, compassionate, and a great artist.” On Sept. 2, 300 people with candles and drums turned out at the Chief Seattle Club to affirm the value of the woodcarver’s life and his place in the community. They expressed their outrage at the senseless death of a harmless man. “An elder said this wasn’t the time and place for that,” said Penny Octuck Cole, of Tacoma. “He said tonight we’re remembering who John was, in a quiet respectful way. After that, everyone settled down. But they were quietly making plans for protests.” Seattle’s mayor Mike McGinn was at the vigil with a lit candle. “His attendance spoke miles,” Lewis said. The mayor told those around him that actions, speaking louder than words, would be forthcoming. At a press conference called by community leaders Sept. 3, speakers demanded an inquest panel with at least one Native member approved by the community. Grey said they were holding the Seattle Police Department and the City of Seattle accountable for William’s death. “This tragedy never should have happened,” Grey said. “We are angry and outraged that his life was interrupted for seemingly no reason, and so callously disregarded.” Grey said they’re worried about their most vulnerable community members who suffer regular harassment and abuse on the streets of Seattle, and added that it is incredible that in a city named for an Indian chief, a police officer would not recognize that an Indian carrying carving tools was no threat.

“It’s really appalling what happened to my relative,” said Chief Jack Thompson of the Ditidaht First Nation, who traveled to Seattle from Canada’s Vancouver Island. He said Williams was just trying to make a living as he walked the streets of Seattle. “I hope the police would find it in their hearts to do the right thing.” Lewis, an art framer said Williams used to come by his shop for wood scraps. “He’d carve on the front porch and we’d talk. He was probably one of the gentlest people I know. For them to trivialize his life riles me to no end. “We are not a people of a romantic past, nor are we a people of an irrelevant present and we are not going to allow this to be swept under the rug. We want the police department to own the responsibility of their actions, then get on with the job of asking, is this person culpable?” Several British Columbia newspapers reported that Williams’ death had left Native communities in Canada reeling. First Nations leaders held a news conference Sept. 3 to demand a full investigation. “I’m deeply angered and outraged to hear once again the police shooting down one of our people in a clearly unprovoked situation,” said Grand Chief Stewart Phillip, president of the Union of British Columbia Indian Chiefs. Philip said he does not accept the police version of the incident. A demonstration and community memorial service is pending discussions between the family and various Native organizations. Williams has at least two brothers and one sister living in the Seattle area. Grey said regular updates will be posted at www.chiefseattleclub.org.
at 9:46 AM