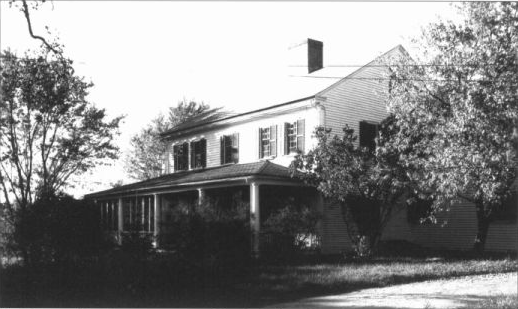 While the Dropkick Murphys are a fine group, I’ve always been more interested in the name of the band itself. Members have always told that they took the name from a supposed detox center, owned and operated by a former wrestler by the name of John “Dropkick” Murphy. The Boston Herald columnist Howie Carr has salted his columns with mentions of the place for years— generally in reference to the Kennedys—well before the existence of the band of the same name. E.g.:


“And how would you like to be Joe Kennedy? Here’s your uncle, looking more like an escapee from Dropkick Murphy’s every day, and he says he’s going to run again in 1994? ”
- Howie Carr. Boston Herald. October 28, 1991

So while the name of the place is fairly well-known (around Boston anyway) its actual existence has remained somewhat more legendary. Several places mention that its official name was “Bellows Farm” located in Acton, Massachusetts. There is now a road called “Bellows Farm Road” in Acton on or near the original property. 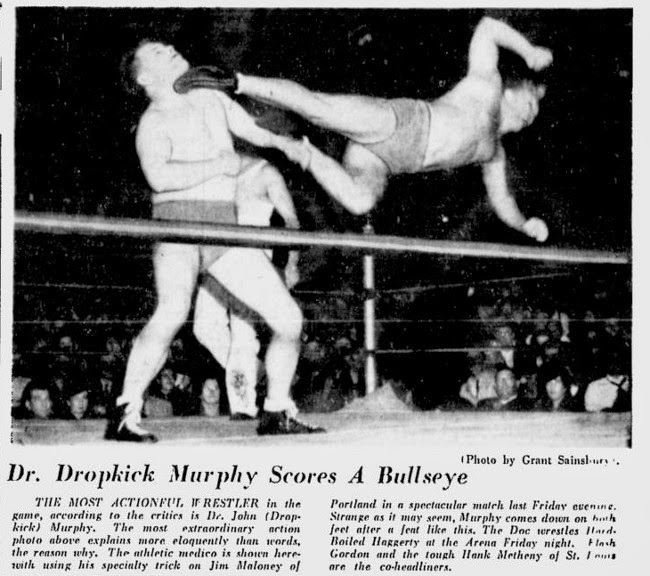 While I couldn’t find any specifics or pictures of the facility, several mentions of it show that this must be the place. 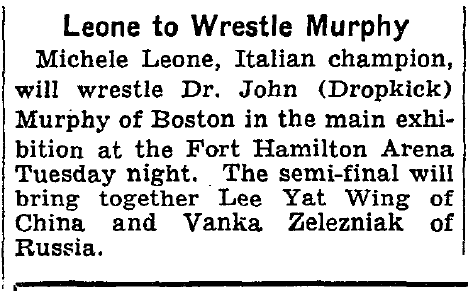 A Massachusetts court case from 1973 (2 years after the facility closed) mentions Murphy:


“This is a bill in equity under G. L. c. 231A, seeking a declaration whether certain amendments to the zoning by-law of the town of Acton (town) apply to a parcel of land (locus) owned by the plaintiffs Bellows Farms, Inc. and John E. Murphy and on which the plaintiff Donald P. O’Grady has contracted to build 402 apartment units. The defendants are the town, its building inspector and the members of its board of selectmen.”
BELLOWS FARMS, INC. & OTHERS vs. BUILDING INSPECTOR OF ACTON & OTHERS. April 4, 1973 - November 7, 1973.

This land is along the Nashoba Brook in Acton which is mentioned in an article on fishing in Massachusetts from the New York Times:


We visited a spot in Boston (Jamaica Pond); then he gave me an hour on Neshoba Brook (on a stretch open to the public and owned by Dropick Murphy, a former wrestler) where I caught two brook trout.
“Wood Field and Stream” New York Times. May 9, 1968.

$25 per week works out to be about $325 per week in 2009 dollars, which isn’t exactly cheap. Legends of the place being some last stop for end of the line winos might be a bit misplaced.
Dropkick Murphy was an actual wrestler. Here is small clip from back when The New York Times actually used to report on professional wrestling:


In 1963 my family and I were living in apartments built and owned by John “Dropkick” Murphy, on Rte 2 or 2a, I forget which, in Acton. I was then working in Bedford, Mass. We called him John, and he was one of the nicest gentlemen I ever met. He always brought champaigne on Christmas Eve, sometimes took all the children in the apartment complex to the Ringling Bro. circus at the Garden, build a sled ramp for the kids, etc. The rehab farm was still used, and sometimes John gave some of his customers odd jobs around the apartments. We left Acton in 1965, so I haven’t seen the apartment site since then-I guess it’s changed. The Dropkick Murphey singing group should post some information on John Murphy on it’s website, since I think they would have liked John Murphy and vice versa.
» Posted by Clarence Townsend on May 10, 2009 05:43 PM

Indeed “Dropkick” Murphy was a pro-wrestler in
promoter Paul Bowser’s stable in Boston, MA. The venue for all Bowser’s events was the old Boston
Arena on St. Botolph Street. Murphy also had a
doctorate in Podiatry. I saw him wrestle numerous times in Boston as a kid in the mid-40’s. He was
a slick wrestler who was almost always on the
second bill. I remember him wrestling to a draw
with Leo Numa (real name Axel Anderson). His dry
out tank in Acton was truly legendary…a book should written about Murphy’s life.