Preserve or restore? A tale of two 1956 Mercedes-Benz 300SL Gullwings


Something remarkable happened a few days ago at the Gooding & Co. auction in Scottsdale, Ariz. It wasn't the 1958 Ferrari 250 GT Cabriolet that sold for $6.16 million, more than a million over the high estimate and the overall second highest sale among the six auction houses. And it wasn't really the 1955 Lancia Aurelia B24 Spider America Convertible that brought $1.8 million.
Rather, it was the sum received for a 1956 Mercedes-Benz 300SL Gullwing Coupe: $1,897,500. What made this result remarkable is that the car was in rough, unrestored condition inside and out, and that a restored Gullwing at the same auction brought $1,402,500. A triumph of originality over perfection in the ever-changing world of classic cars?

Just a decade ago the winning bidder of the unrestored car would have been able to pick it up for about 60 to 70 percent of the price of the restored example. We've seen examples of patinated, worn cars bringing more than their restored doppelgangers at auction, though perhaps not in such a dramatic fashion as last week in Scottsdale. What's more, the two cars were the same year and featured the same exterior and interior colors, albeit now in distinctly different shades. So just what did the two buyers get?
The unrestored 1956 Mercedes-Benz 300SL Gullwing, chassis number: 198.040.6500299, is a numbers-matching Southern California car that had been sitting on flat tires for the last three decades. This particular example is one of the last built for the 1956 model year, finished in black over red leather, and assembled in U.S.-spec with sealed beams and bumpers. The car was first sold to William “Ike” Eichelkraut, a Northrop Grumman engineer, later passing into the collection of a North Hollywood enthusiast who owned at least five 300SLs during the 1960s. Its third owner, Robert Robar of Van Nuys, purchased the car in 1965 and after driving it for about a decade let it sit in his garage. The last time the registration was paid on this car was 1983, though it appears that the car was not really seeing regular use for a few years prior (the California Highway Patrol inspection sticker says December 1975). So it had been immobile for at least 30 years. A long time for a car, and it shows.


Originality was the major selling point here, and the car seemed to have it in spades, though the consignor indicated that the majority of the paint was original. While a few tried to guess just which panels had been repainted, there was little question that the interior had been original: the headliner was sagging, the leather had turned dark in places, and the driver's seat was... exceptionally worn, let's put it that way. This is the ultimate "preserve versus restore" car: a sympathetic mechanical restoration would get it into running shape after a five figure bill, but would a six-figure concours restoration be out of the question? Hopefully that's a decision that the buyer of this example made before bidding on this car.Well, the buyer of the "cheaper" concours grade black over red leather 1956 Mercedes-Benz 300SL Gullwing seemed to know that this was the car they wanted. This three-owner example, chassis: 198.040.6500214, had been in the same family ownership from 1957 until 2006. It started out in life as a red over green tartan cloth example, and after it was sold to its second owner in 2006 it was given a no-expense-spared restoration by RM Auto Restorations in Ontario. The car had covered just 1,000 miles since it was restored in 2007, and once again, it shows.
Gullwing prices have been heading up, even through the worst of the 2008 recession, pulling the 190SL along with it (though perhaps not to the extent preferred by 190SL owners). Just five years ago a concours example would have struggled to reach the $700,000 mark, yet here we are in 2014 where few shrug at the $1.4 million paid for a concours example.

The question of whether a (mostly) original and very unrestored 1956 Mercedes-Benz 300SL Gullwing is worth $1.8 million has already been answered in the affirmative, at least by the buyer, so what remains to be seen is whether the premium paid for its originality will prevent the owner from turning it into a $2 million plus 1956 Mercedes-Benz 300SL Gullwing.
Some said that the bids reflected the buyers' intentions here perfectly: if the buyer of the unrestored example wanted a concours-grade Gullwing, he or she would have bid on the concours-grade Gullwing. But is the unrestored car, a Gullwing that's more than $100,000 away from being shiny and new, worth more than one that's been lovingly kept and converted to slightly more appealing colors? On that day, it was worth more. That's the nature of the market. 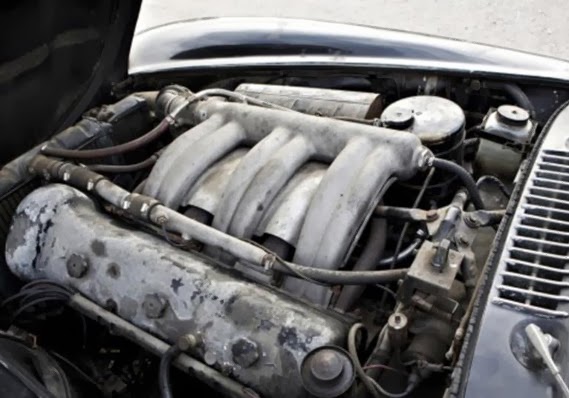 What would you do with the unrestored Gullwing: preserve and return it to a drivable condition, give it a complete restoration (money no object), or keep it as is?

Get more car news, reviews and opinion every day: Sign up to have the Autoweek Daily Drive delivered right to your inbox.
at 1:51 PM