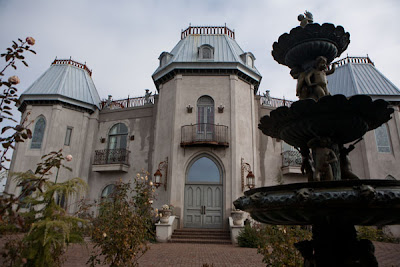 Photo: Steven St. John
ALBUQUERQUE, N.M. - Looming over a barren industrial neighborhood locals call skid row, stands Gertrude Zachary's castle. Rising like a fortress between a rescue mission and the railroad tracks, the estate is encircled by a wall 10 feet high. Within is a pool, courtyard garden, guest home and a 8,500-square-foot main home with four turrets each rising 50 feet into the air. Slideshow: See photos of the Paris-inspired dream houseSlideshow: See photos of the Paris-inspired dream house The estate is a showcase for Ms. Zachary's collection of religious art, stained glass windows and antique arched doors purchased in Europe and elsewhere. The arched brick entryway echoes the transept of a Gothic church. On the first floor, several reception rooms flow together, under a 12-foot ceiling. An iron banister staircase leads to the second floor, with its two bedrooms and a playroom for Ms. Zachary's grandchildren. An adjacent bathroom is home to a large, wooden unicorn. The Castle on Skid Row On the walls, Ms. Zachary has hung modern paintings alongside quirky framed collections, such as gun shell casings, sequined vintage purses and miniature crowns that once adorned religious statues. 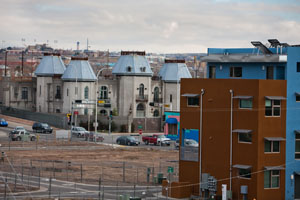 She has a particular affection for soft, glittering lights: She's hung 210 chandeliers, many of them hand-blown in Murano, Italy. To clean them takes four days of work on the part of the estate's caretaker.  Ms. Zachary's home, across from a shuttered restaurant and abutting the parking lot of a raucous bar, is the only apparent residence in the desolate neighborhood. Lush blue-green velvet curtains and centuries-old door and window frames overlook parking lots, an overpass and a billboard advertising Ms. Zachary's antique and jewelry business. Ms. Zachary's daughter, Erica Hatchell, who lives in a more affluent area, said her mother couldn't be dissuaded from building here. "Nobody else would have made that decision," she said. "I like downtown," said Ms. Zachary, 73, noting that cities such as Paris and New York have homes in industrial areas. Married and divorced three times, she lives in her estate with her Shih Tzu named Zipper. There's no shortage of color to Ms. Zachary's life. Her father, Julius E. Witzky, was the chief engineer at Mercedes-Benz. His family said he helped design the U-boat and the Hindenburg, the doomed airship. She received a jewelry manufacturing plant in a divorce settlement from her third husband in the mid-1970s, and her fortune grew as she expanded the business and made well-timed real estate investments. 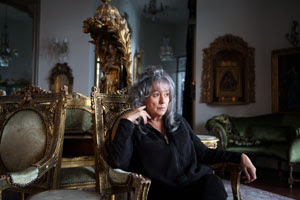 In 2000, Ms. Zachary bought a parking lot adjacent to her downtown antiques store for $250,000-a fraction of the price of a similar piece of land in the city's more desirable residential neighborhoods. It also boasted a 360-degree view of the Rio Grande valley and was a quick drive to her three nearby stores and a manufacturing plant. Because the 0.589-acre lot was downtown, Ms. Zachary's plans-her home was inspired by one in Paris-won easy approval from the city, which makes new home construction difficult in most areas because of its stringent rules to protect historic neighborhoods. Gertrude Zachary. When construction began in 2006, few believed it would become a house. Some thought it looked like a concrete castle; one wondered if it might be a new Scientology building. But the result, completed in 2008, drew praise from architects and builders alike. While Ms. Zachary said she spent $2.1 million to build the mansion, a knowledgeable local expert estimated it cost perhaps double that amount. The assessed value of the home and land is $1.3 million. With her eye always on business, Ms. Zachary occasionally opens up her home for local fund-raisers, "People see how beautiful the chandeliers are and we usually end up selling a couple chandeliers the next day," she said. Indeed, some of the furnishings in the home still have tags on them. But some items she'll never sell, such as the intricate wood-panel walls and cornices, purchased from a local men's furnishings store that went out of business. Ms. Zachary's builder fit the dark ash panels to one of the walls of the home's large reception space. Likewise, she purchased etched glass from Paris and soaring arched doors from an estate in Buenos Aires, and designed her home to fit them. After 10 years of collecting in Europe, she owns a wardrobe said to be from a Parisian brothel, where the girls use to hide, as well as a cradle said to have been made for Napoleon III's infant son, which now sits decoratively in the second floor bedroom of her guest house. Does she truly believe it belonged to him? "It's a nice story," she said, her brown eyes looking amused. Ms. Zachary has made a few unusual decisions, such as installing in her garage some arched stained glass panels sold from a de-sanctified church in Pittsburgh. She said she's not sure why she made that decision, but her daughter Erica explained that at night, when the garage lights are on, the windows are a beautiful way to welcome her home. For her wardrobe, Ms. Zachary has devoted one clothes closet to dark colors and the other to light. "Anything to be unique," laughed Erica
at 11:52 AM