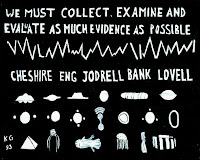 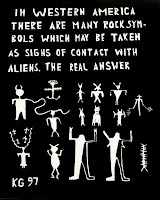 Ken Grimes’ art is characterized by his use of black and white acrylic on canvas and board. The stark quality of the white text or image on black background runs counter to the complex reality that his paintings seek to convey. That is, the simple images help explore the diverse registers of phenomenon in this universe that form a tantalizing web of connections and stratagems. The “coincidence board” is Grimes’ own apt phrase for the uncanny coincidences that pervade our lives. In 1971 Grimes attempted to win the state lottery in Cheshire, Connecticut by using telepathy on the crowd gathered around the drawing site. Simultaneously, another Ken Grimes in Cheshire, England won a large sum of money in that country’s rendition of a lottery: the soccer pool. Since Grimes’ fateful encounter in 1971, his “coincidence board” has considerably expanded. His pictorial investigations probe paranormal incidents from outer space. Alien visitations, crop circles, flying saucers, and space travel are all themes Grimes seeks to understand through collecting, examining, and evaluating their meaning in his paintings. “Ken Grimes’ paintings reveal a passion closer to religious inspiration than political dogma or personal rant,” Russell writes in the exhibition essay, “for what drives his work is a search for signs of a cosmic connection, a belief in the imminence of an unsettling truth, and a confidence that art can be an agent of revelation.” 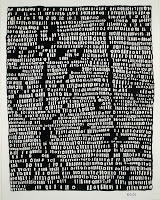 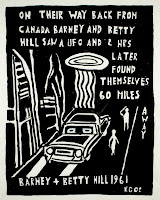