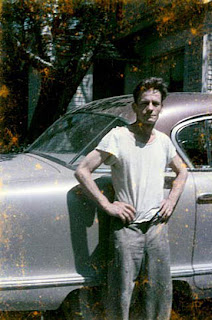 Had the good fortune to go over and check out the new exhibits at the American Folk Art Museum this weekend and saw some really amazing stuff by outsider artist Eugene Von Bruenchenhein. If you aren't familiar with outsider art, it's really worth checking out. Basically these are wholly self taught artists working outside the art mainstream. Often, their works are not appreciated, or even viewed, in their own lifetime.
Von Bruenchenhein was a baker and florist living in Wisconsin from 1910-1983 with his wife Marie. His work was only discovered after his death when a police officer, hoping to help out Von Breunchenhein's then destitute wife, contacted a local museum owner to see if any money could be earned by selling the thousands of paintings, photographs and sculptures that the artist spent his life making. 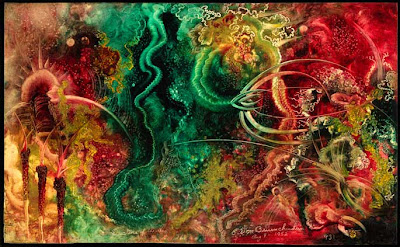 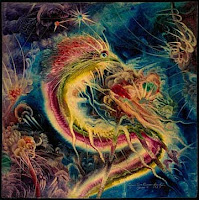 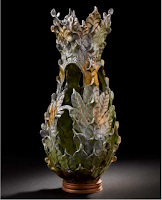 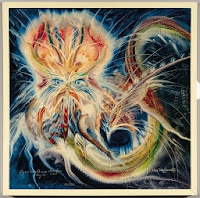 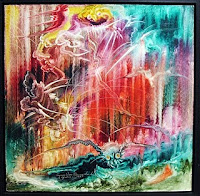 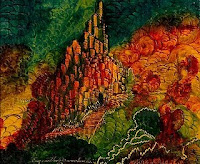 He began as a photographer, almost exclusively taking pictures of Marie. Early photos are pretty straightforward but soon he began experimenting with double exposures and created distinct, surreal images like this: Soon Von Bruenchenhein moved onto painting, creating eerie, abstract and apocalyptic images like these. Most of these are painted on scrap pieces of cardboard he picked up and bound with masking tape. He painted with his fingers, finger nails and brushes he sometimes made with Marie's hair. (wow, that really makes him sound more nuts than I think he was. Keep in mind he was a fairly poor dude so alot of this is about making due with what he had) Was he satisfied being a photographer and painter? Nope. Apparently one day he stumbled across some clay, brought it home, and started making things like this. Even dinner wasn't safe. 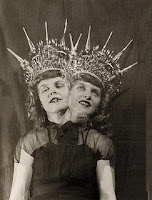 When Eugene and Marie had chicken or turkey for dinner he kept the bones and made sculptures like these, painted with metallic paint he got from a guy he knew that worked at an auto body shop. (again, not nuts, just poor and creative) While not my favorite of his work, I'm blown away by these pen and ink drawings he did later in life. They're just such a radical departure from the rest of his art that it almost seems like they were done by someone else. How impressive to make such a radical but assured left turn so late in life. The thing I love about this work is that here was a guy that was alive with art. He saw it everywhere he looked, felt it in everything he touched. And it didn't matter that he spent his life as poor and unrecognized, he worked passionately, constantly innovating and evolving, his entire life. While it's sad that he didn't enjoy any of his well-deserved notoriety, it somehow makes his efforts and his dedication so much more heroic. An example for us all I think.

How about all of you? Where do you find your inspiration? Found any somewhere unusual lately?


Jeff Hirsch The Eleventh Plague Coming from Scholastic, Fall 2011 Find me at jeff-hirsch.com and @jeff_hirsch

great stuff. Just discussed him with an artist friend of mine who owns one of his and has an old catalogue.

you and I are kindred spirits too, alkies in recovery.