Martha Cooper landed in LA yesterday and will spend the next week installing her photos and their remixed new versions beside them, even flanking hers like stereo speakers. Since the press release has gone out we thought we’d share with you the bio written by Steven P. Harrington and the promo photo by Jaime Rojo which will appear in a special issue of The Art Street Journal dedicated entirely to her to come out this week. 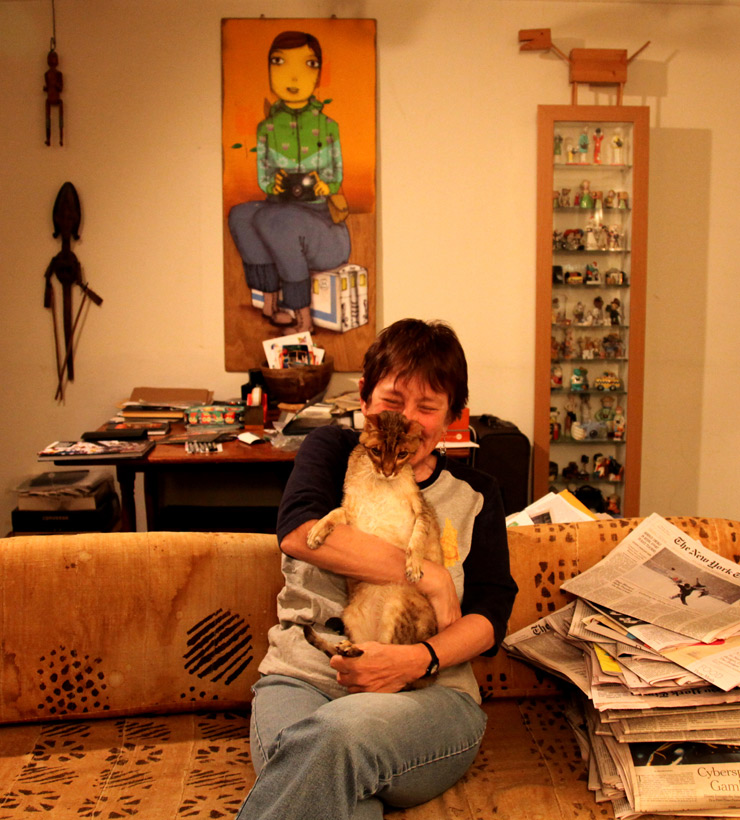 Martha and Pablo at home, with a portrait of her sitting on a train car with camera in hand painted by Os Gemeos overlooking the scene. (photo © Jaime Rojo)

The daughter of a Baltimore camera store owner, Martha Cooper’s romance with photography began in the 1940s when bobby-soxers and penny loafers were the sign of edgy youth culture. Her dad, an amateur photographer himself, gave his small girl a camera and together they hit the streets in search of adventure. “Yeah, my father used to take me out and we would take pictures. That’s what I thought photography was…we were just looking for pictures,” she recalls. Six decades later, Cooper is still looking for pictures; meanwhile, many works from her archive are cited as pivotal recordings of the birth of hip-hop culture and its plastic art form, graffiti.

During the cultural upheavals of the 1960s, Cooper earned a Bachelors of Art degree in Iowa, taught English for the Peace Corps in Thailand and rode a motorcycle from Bangkok to obtain a graduate degree at Oxford. As a freelancer and staff photographer in Japan, Maryland and Rhode Island in the early 1970s she moved to the media and art center of New York City to catch bigger fish. Landing a job on the staff of The New York Post in 1977, she discovered that the resistant and competitive boys club of photographers there were reluctant to countenance this scrappy young woman shooting hard news stories and Studio 54 celebrities.

Hungry for discovery, Cooper would spend her time to and from assignments in bombed-out neighborhoods, where she took pictures of kids entertaining themselves with games they devised on the street, often with the humblest of materials. It was during one of those trips that she stumbled on graffiti and the members of its community. She met a young boy who suggested she photograph the work she was seeing, then showed her a stylized drawing of his name, or piece, in his notebook.

Then he asked her if she wanted to meet “The King”.

Following this lead to Brooklyn, Cooper met Dondi, the citywide-famous graffiti writer who kept a published photo of hers in his black book because its background contained one of his graffiti throw-ups. Cooper quickly realized that she had stumbled into a lively street culture and became an avid student of the teen writers she befriended. By the time she took her last news picture for the New York Post in 1980, her primary desire was to capture as many pieces, tags, and trains as she possibly could find. Today, she remarks on her near-obsessive devotion to documenting New York’s graffiti: waking before dawn to hit the street, waiting five hours for a freshly painted #2 train to pass with the sun at her back and countless secret adventures with vandals in train yards, evading transit police in order to pursue a shot.

Joining efforts with fellow graffiti photographer, Henry Chalfant, Cooper proposed putting together a book of their documentation. The pair endured multiple rejections from publishers while lugging around a big “dummy” book with their pictures glued to the pages. Eventually, however, they landed a deal and Subway Art was published in 1984. Although not an immediate success, it came to sell half a million copies and established itself as a holy book for fans, aspiring artists and art historians worldwide.

By the time the 25th anniversary edition was published in 2009, generations of graffiti and street artists had been influenced by it and the hip-hop culture Cooper and Chalfant had captured had gone global.

In the intervening years, Martha Cooper never stopped shooting. Her love of serendipity on the street and the exploration of cultures led her to publish thousands of photos in books such as R.I.P.: Memorial Wall Art, Hip Hop Files 1979-1984, We B*Girlz, Street Play, New York State of Mind, Tag Town, Going Postal, and Name Tagging. Her work has been exhibited in museums and galleries worldwide and published in numerous magazines including National Geographic, Natural History, and Vibe. While she is still shooting graffiti, street art and the occasional break dance competition today, Cooper’s current project involves documenting people and events in Sowebo, a drug-riddled neighborhood in her birthplace of Baltimore.


Steven P. Harrington is editor-in-chief of BrooklynStreetArt.com and co-author (with Jaime Rojo) of Brooklyn Street Art and Street Art New York, both by Prestel Publishing. He and Jaime Rojo are also contributing writers on street art for The Huffington Post.
at 11:36 AM