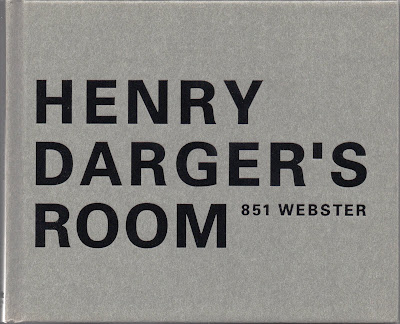 Henry Darger is the quintessential outsider artist. He grew up an orphan, escaped from the asylum for "feeble-minded boys" at age 16, led a mostly solitary life working as a janitor, and lived alone in a one-room apartment in Chicago for 40 years. Upon his death his landlord discovered that the tiny room contained more than 30,000 pages of manuscripts and several hundred watercolor paintings. Most of them comprise his most famous work, In the Realms of the Unreal, the story of the Vivian girls, seven sisters who assist a daring rebellion against an evil regime of child slavery.

What most people remember about the paintings is that the little girls have penises. I'm not a betting woman but if I had to put money on it I'd guess that Darger just never learned that girls don't look the same as boys. But I digress...the important thing is that he was a total unknown with an incredible secret life, spending decades writing and painting his life's work without another soul even realizing it. I first heard his story about ten years ago, and became fairly engrossed in it. I was at first disappointed to learn that the In the Realms of the Unreal has not been published in full (although, quite frankly, how could one publish a 15,000+ page book--and more importantly, who would read it?) but did manage to find a volume excerpting sections of it at the Pratt Library, where I worked at the time. Anyway...about a year ago I was in the PS1 book store and noticed this on the shelf. It was a little bit pricy but it was well worth the purchase. It's a beautiful little book of, yes, photos of Henry Darger's room, which his landlord has faithfully kept nearly just as it was when Darger died in 1973. 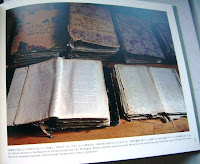 It starts with a series of black and white shots, taken in the 70s just after Darger's death. I like the inspiration wall on the right. Darger was obsessed with protecting children, which, knowing just a bit about his history in the asylum, seems pretty understandable. Most of them were taken in 1999 and are in color, with this almost golden sepia tone to them. 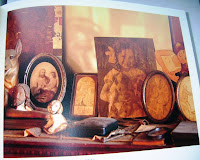 I love how his paints are still strewn out on the table, as if he might come back to them at any minute. Some original manuscripts of Realms. 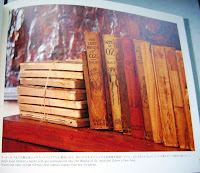 Some of them were bound by the artist; the rest are tied with twine. I like the wallpaper covers with hand painted titles. Darger loved children's books with girl protagonists. He owned 13 first edition copies of the Oz books.
Photos of little girls and religious images on the mantelpiece.