A member of the hit cable TV show "Deadliest Catch" fishing crew has been found dead in an Alaska motel room, police said Wednesday. Justin Tennison, who worked on the Time Bandit, one of the vessels on the popular Discovery Channel reality series that depicts the crab fishing industry in the dangerous waters off Alaska, was found dead Tuesday afternoon in Homer, authorities said. 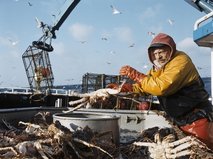 Beer, hard liquor and a small amount of marijuana were found in the room, Homer police Lt. Randy Rosencrans said. Police believe a party was held in the room on Monday night — two rooms were registered under Tennison's name and nearby guests complained about the noise.

The 33-year-old Tennison is set to make a posthumous debut in the series' seventh season, which is scheduled to begin in April, Discovery spokesman Josh Weinberg said. "Justin was tough as a bull and was an all-around good hand," a statement posted on the Time Bandit's official website said. Weinberg also released a statement, saying Discovery was saddened by the news. "We send our sympathies to his entire family and fellow crew members during this most difficult time," the statement said. TMZ previously reported that Tennison had died. The cause of death was unknown Wednesday afternoon and foul play isn't suspected, Rosencrans said. An autopsy by the state medical examiner's office was scheduled to take place later Wednesday. The death comes a little more than year after Capt. Phil Harris of the "Deadliest Catch" fishing vessel Cornelia Marie died following a massive stroke at age 53.
at 4:34 PM