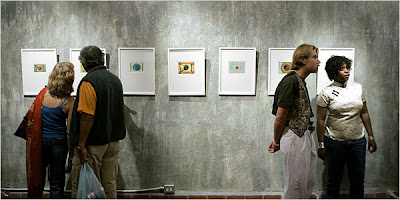 The morning after the opening of a show of his recent work, the artist was in his studio, a concrete cell in the Pelican Bay State Prison, where he is serving three life terms in solitary confinement for murder and for slashing a prison guard’s throat. He was checking his supplies, taking inventory. Mr. Johnson's paintbrush is made of plastic wrap, foil and strands of his own hair.

His paintbrush, made of plastic wrap, foil and strands of his own hair, lay on the lower bunk. So did his paints, leached from M&M’s and sitting in little white plastic containers that once held packets of grape jelly. Next to them was a stack of the blank postcards that are his canvases. On Friday night, more than 500 people had jammed into a gallery in San Miguel de Allende, Mexico, to assess 25 of Donny Johnson’s small, intense works. There was sangria, as well as big bowls of M&M’s. By evening’s end, six of the postcard paintings had sold, for $500 each. “They are made with these chocolate pigments,” said Adolfo Caballero, an owner of the gallery. “He has really created a new kind of technique, because he doesn’t have access to conventional materials.” Most prison art, the kind created in crafts classes and sold in gift shops, tends toward kitsch and caricature. But there are no classes or art supplies where Mr. Johnson is held, and his powerful, largely abstract paintings are something different. They reflect the sensory deprivation and diminished depth perception of someone held in a windowless cell for almost two decades. They pulse, some artists on the outside say, with memory and longing and madness. Others are less impressed, saying the works are interesting examples of human ingenuity but fall short of real artistic achievement. Mr. Johnson, 46, has something of the middle-aged biker about him, with long slicked-back hair, unfortunate tattoos, a growing paunch and an unruly beard that puts one in mind of ZZ Top or a garden gnome. He was in a changeable mood on Saturday, eager to hear about the opening but also aware that it was, in the scheme of his life and future, a small thing. He spoke with easygoing and sometimes lighthearted candor, punctuated with wariness and flashes of despair. He declined to discuss the details of his crimes, though he admitted to a past attraction to drugs and violence. When the conversation turned to his paintings, though, he held his own in the art-speak department. “I love myth and chaos and space,” he said. Mr. Johnson was 20 when he pleaded guilty to second-degree murder in 1980, drawing a sentence of 15 years to life. According to court papers, he and two friends had stabbed an acquaintance to death after a party in San Jose, in a dispute over the sale of cigarettes laced with PCP. Nine years later Mr. Johnson was charged with the nearly fatal stabbing of one guard and with assaulting another. That case went to trial, with Mr. Johnson saying he had been startled and, thinking he was under attack by a gang member, had acted in what he thought was self-defense. He was convicted and sentenced to two additional terms of nine years to life. 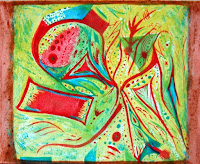 His chances of ever being paroled, he said, are small. The prison here is an expanse of grim concrete bunkers, spread out over 275 acres not far from the California coast and the Oregon border. It is as sterile and monochrome as Mr. Johnson’s paintings are bursting out with color. About 3,300 of the state’s most dangerous prisoners are held at Pelican Bay, which is among the toughest prisons in the nation. But even here there are varying levels of security. The problem prisoners, including Mr. Johnson, are held in the Security Housing Unit, which everyone calls the SHU (pronounced like “shoe”). He lives in an 8-by-12-foot concrete cell. His meals are pushed through a slot in the door. Except for the odd visitor, with whom he talks through thick plexiglass, he interacts with no one. He has not touched another person in 17 years. Asked about his circumstances growing up, Mr. Johnson assessed his current state instead. “I am of the dungeon class,” he said. In “Donny: Life of a Lifer,” a short book he wrote in 2001, Mr. Johnson said the lack of sensory stimulation and human contact in the SHU was a form of torture. “I’d cut off my right arm,” he wrote, “to be able to hold my mother.” His art, he said on Saturday, is a solace, an obsession and a burden. 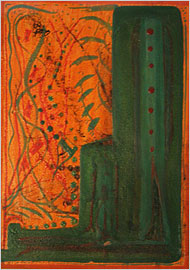 He orders his supplies from the prison commissary once a month. The M&M’s are 60 cents a pack, and he gets 10 packs at a time. He puts from one to five of the candies in each of the jelly containers, drizzles a little water in and later fishes out the chocolate cores, leaving liquid of various colors, which get stronger if they sit for a couple of days. Skip to next paragraph A photo of Mr. Johnson at San Quentin State Prison 21 years ago. Multimedia Audio Slide Show: Painting in Solitary Audio Slide Show: Painting in Solitary Enlarge this Image An example of his work. He has tried other candy, but there are perils. “It’s the same process with Skittles,” he said, “but I end up eating them all.” Sometimes he experiments with other materials. “Grape Kool-Aid in red M&M color makes a kind of purple,” he wrote in a letter to a reporter not long ago. “Coffee mixed with yellow makes a light brown. Tropical punch Kool-Aid granules can be made into a syrup and used as a paint wash of sorts. But it’s a bear to work with and it’s super-sticky and it never dries.” And there are frustrations. “If lint gets in a piece, I feel like screaming,” he wrote. While prison officials will not allow Mr. Johnson to have conventional art supplies or much of anything else in the SHU, they have not interfered with his work or stopped him from mailing his paintings to his family and friends. The prison will not let him keep the proceeds from his sales, Mr. Johnson said, and he intends to donate the money to the Pelican Bay Prison Project, a nonprofit group that will use it to help the children of prisoners. On the outside, the paintings have drawn admiration and even awe. “It has the vibration of color you find in van Gogh’s work,” said Mr. Caballero, the Mexican gallery owner. “Sometimes it looks like Motherwell. Sometimes it looks like de Kooning. And there is also something of Munch.” Stephen A. Kurtz, a semiretired psychoanalyst who has worked with prisoners and helped arrange the show in Mexico, said he generally had no use for their art. “The prison art I’ve seen is very stereotypical: women with breasts out to the next block and beefy guys with them,” Mr. Kurtz said. Mr. Johnson’s work, he said, is a different matter. “It reminds me,” he said, “of Pollock in the early-to-mid-1940’s, when he was in Jungian analysis.” Mr. Johnson’s circumstances and materials may influence viewers’ perceptions, and not everyone is convinced that he is the real thing. “I’m not really responding to it aesthetically,” said Brooke Anderson, director and curator of the Contemporary Center at the American Folk Art Museum, “but I’m totally responding from its place of origin. It kind of reminds me of spin art. It feels very psychedelic, like the 1970’s hippie culture.” Mr. Johnson is working in a rich tradition of art produced in prisons and asylums, Ms. Anderson continued. “Time and the availability of time,” she said, “has an awful lot to do with an explosion of expression.”
at 2:10 PM