RIP Cherokee Cowboy Ray Price. This is a tough one. Nothing better than a Ray Price shuffle.

Ray Price, who was at the forefront of two revolutions in country music as one of its finest ballad singers and biggest hit makers, died on Monday at his home in Mount Pleasant, Tex. He was 87. 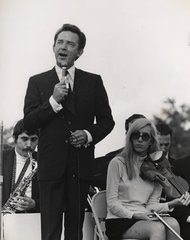 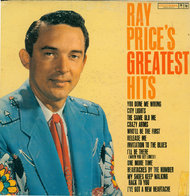 His death was announced by the veteran country disc jockey Bill Mack, a spokesman for Mr. Price’s family. Mr. Price had pancreatic cancer and had until recently been in hospice care.
Over a career that began in the 1940s, Mr. Price placed more than 100 singles on the country charts, including Top 10 hits like “City Lights,” “Heartaches by the Number” and “Make the World Go Away.” He hired future country stars to play in his band, notably Roger Miller, Willie Nelson and Johnny Paycheck. And Pamper Music, the publishing company that he owned with two partners, helped start the careers of hit songwriters like Harlan Howard, Hank Cochran and Mr. Nelson.
He was elected to the Country Music Hall of Fame in 1996.
Mr. Price first helped change country music in the mid-1950s, when, hoping to distinguish his sound from that of his former roommate Hank Williams, he and his band transformed the gutbucket country shuffle of the postwar era into sleek, propulsive honky-tonk.
“We were having trouble getting a good, clean bass sound,” he said in an interview with The Washington Post in 1998, talking about the session that produced his breakthrough hit, “Crazy Arms,” a No. 1 country record for 20 weeks in 1956. “So instead of going with the standard 2/4 beat, I said, ‘Let’s try a 4/4 bass and a shuffle rhythm,’ and it cut. It cut clean through.”
Now a part of the American musical vernacular, the “Ray Price beat,” as it came to be known, not only achieved its desired sonic effect, but it also reclaimed the country charts for country music. “Crazy Arms” knocked Carl Perkins’s “Blue Suede Shoes” from the top spot at a time when teenage-friendly rockabilly acts like Perkins and Elvis Presley were crowding out more traditional singers like Hank Thompson and Hank Snow.
In the middle to late 1960s Mr. Price refined his music further by singing in a lower register and combining lush string orchestration with soul-inflected rhythms, in the process helping to give birth to the so-called countrypolitan sound. His recording of Kris Kristofferson’s “For the Good Times,” a No. 1 country hit that stalled just outside the pop Top 10 in 1970, epitomized the affecting new hybrid. It also won a Grammy Award for best male country vocal performance.
The constant amid these transformations was Mr. Price’s voice, a pliant baritone capable of conveying great depth of feeling much like that of Tony Bennett, a musical hero of his.
“My voice is my instrument,” he told The Post. “I’ve worked all my life to make sure I enunciate properly. I try to make the melody true — I can’t stand an off note.”
Noble Ray Price was born on Jan. 12, 1926, on a farm near Perryville, Tex., in the eastern part of the state. Raised in Dallas by his mother after his parents divorced, he spent summers on his father’s farm. The mix of rural and urban sensibilities he grew up with would later manifest itself in his music.
After serving in the Marines from 1944 to 1946, Mr. Price enrolled in North Texas Agricultural College to study veterinary medicine. He also began singing in nightclubs and was discovered by the producer Jim Beck, who secured him a contract with the Nashville label Bullet Records.
Mr. Price began singing on “The Big D Jamboree,” a radio barn dance in Dallas, toward the end of 1949. He signed with Columbia Records in 1951, after which he moved to Nashville at the urging of Hank Williams and joined the Grand Ole Opry.
Mr. Price’s initial recordings for Columbia revealed him to be a skilled Williams protégé, but despite the enormous popularity of his mentor, Mr. Price failed to gain an audience on country radio. Even the name of his band, the Cherokee Cowboys, was derived from that of Williams’s group, the Drifting Cowboys. Mr. Price did not become a star in his own right, or distinguish himself as a musical stylist, until the surging fiddle and 4/4 bass line of “Crazy Arms” erupted onto the country airwaves in May 1956.
Though no longer a force on the country charts by the mid-’80s, Mr. Price, who for decades maintained a working ranch in Texas, continued to tour and record. In 2007 he released the album “Last of the Breed,” a collaboration with Mr. Nelson and Merle Haggard, which won a Grammy for best country collaboration with vocals.
He is survived by his wife of more than 40 years, Janie, and by a son, Cliff, from a previous marriage.
Although some of his fans had trouble reconciling his shift from rough-cut honky-tonker to countrypolitan crooner, the move never posed any sort of conflict for Mr. Price.
Quoted in the roots music magazine No Depression, he said: “There’s no difference between singing a country song in a Western suit and then going around behind the curtain and walking out the other side with a tux on and singing the same country song with a pop arrangement. It’s the same thing.”
at 11:50 AM