Early treatment of alcoholism and addiction: The Kirkbride Buildings 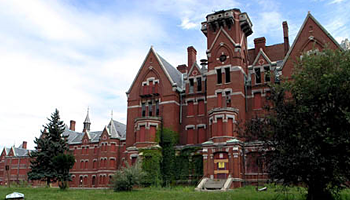 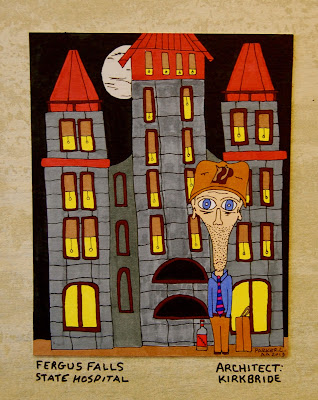 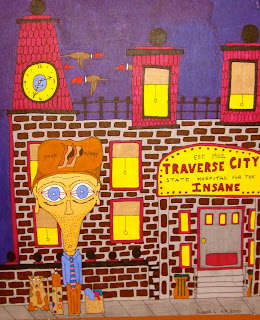 Nineteenth century saw considerable growth in state-sponsored treatment of the mentally ill in the United States, and consequently the rise of asylum building. Growing populations and stress levels of American society created an intensifying frequency of mental illness. Activists for humane treatment, new therapeutic methods in Europe, and important changes in public perception created a progressive environment which fostered the establishment of many public "lunatic asylums" throughout the country. These asylums replaced cruder methods of coping with the mentally ill, such as confining them to prisons or poorhouses where they were often abused and their special needs were rarely met. Dr. Thomas Story Kirkbride was an influential advocate of an asylum system based on the tenets of Moral Treatment. In his annual reports as the superintendent of the Philadelphia Hospital for the Insane and in his published treatise on asylum design and function, Dr. Kirkbride promoted a set of detailed principles that influenced the construction and operation of many American asylums built during this period. Seen by Kirkbride as active participants in therapy, the asylum buildings and their surroundings were a central component of his concept of treatment known as the Kirkbride Plan. 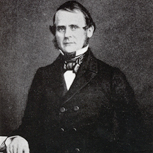 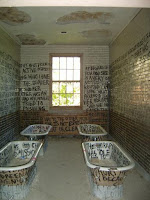 An asylum was intended as a place of structured improving activity, seclusion from suspected causes of illness, and a certain amount of medical therapy. All of these were intended to cure mental disorders, thus improving patients' lives and the quality of society in general. Linear Plan Dr. Kirkbride envisioned an asylum with a central administration building flanked by two wings comprised of tiered wards. This "linear plan" facilitated a hierarchical segregation of residents according to sex and symptoms of illness. Male patients were housed in one wing, female patients in the other. Each wing was sub-divided by ward with the more "excited" patients placed on the lower floors, farthest from the central administrative structure, and the better-behaved, more rational patients situated in the upper floors and closer to the administrative center. Ideally, this arrangement would make patients' asylum experience more comfortable and productive by isolating them from other patients with illnesses antagonistic to their own while still allowing fresh air, natural light, and views of the asylum grounds from all sides of each ward. It was believed crucial to place patients in a more natural environment away from the pollutants and hectic energy of urban centers. Abundant fresh air and natural light not only contributed to a healthy environment, but also served to promote a more cheerful atmosphere. Extensive grounds with cultivated parks and farmland were also beneficial to the success of an asylum. Landscaped parks served to both stimulate and calm patients' minds with natural beauty (enhanced by rational order) while improving the overall aspect of the asylum. Farmland served to make the asylum more self-sufficient by providing readily available food and other farm products at a minimal cost to the state. 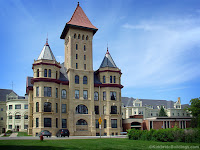 Patients were encouraged to help work the farms and keep the grounds, as well as participate in other chores. Such structured occupation was meant to provide a sense of purpose and responsibility which, it was believed, would help regulate the mind as well as improve physical fitness. Patients were also encouraged to take part in recreations, games, and entertainments which would also engage their minds, make their stay more pleasant, and perhaps help foster and maintain social skills. Dr. Kirkbride's ambition, dedication, and influence ensured the Kirkbride Plan's good reputation throughout much of his lifetime. Toward the end of the nineteenth century however, it lost prominence in the system that it played such a major role in developing. A lack of concrete evidence indicating substantial numbers of permanently cured patients, and no reduction in the incidence of mental illness caused the mental healthcare establishment to seek different forms of treatment. A new generation of asylum superintendents began advocating different forms of asylum design based on different ideas of care. And as psychoanalysis, drug-therapy, and other emerging treatments began to be favored, the idea of the asylum as a staging for the Kirkbride Plan became obsolete. Asylum buildings were no longer built in the Kirkbride mold, though many existing Kirkbride buildings continued as important parts of state hospitals well into the twentieth century.

Their separate histories have often been stigmatized by methods of treatment not intended by Dr. Kirkbride and his contemporaries, and by the seemingly inevitable problems caused by a combination of overcrowding and a lack of necessary financial support. But each of these buildings owes its genesis to a remarkable humanitarian movement to improve the quality and effectiveness of mental healthcare in America. A movement that Dr. Kirkbride was instrumental in driving forward.

Many Kirkbride buildings today are rapidly deteriorating due to years of neglect. With the decline of the state hospital system — due mostly to new forms of treatment, the development of patients' rights, and public outcry over scandals of abuse and unsanitary conditions — these remarkable buildings have fallen into disuse and decay. Sadly, many have been demolished as they were deemed too expensive to renovate, or as commercially useless occupants of valuable land. Many that still exist are threatened with destruction and are rapidly vanishing symbols of an important period in the progress of American mental healthcare. Learn more about the history of individual Kirkbride institutions and see photographs of these haunting buildings at the buildings page. 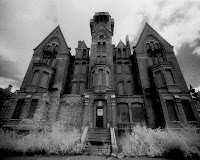 Dr. Thomas Story Kirkbride was born July 31, 1809 to Quaker parents in rural Pennsylvania. After his formal education at University of Pennsylvania Medical School (1828 - 1832), Kirkbride originally sought to become a surgeon. However, in 1840 an offer to become superintendent of the newly established Pennsylvania Hospital for the Insane was presented to him, and he accepted. His training and experience interning at Friends' Asylum and at Philadelphia's Pennsylvania Hospital provided him with the necessary background for the position. 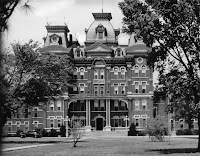 His ambition, intellect, and strong sense of purpose enabled him to use that position to become one of the most prominent authorities on mental health care in the latter half of the nineteenth century. Kirkbride was a founding member of the Association of Medical Superintendents of American Institutions for the Insane (AMSAII) —forerunner of the American Psychiatric Association—serving first as secretary, then later as president. Through this association and in his writings, Kirkbride promoted a standardized method of asylum construction and mental health treatment, popularly known as the Kirkbride Plan, which significantly influenced the entire American asylum community during his lifetime.

Similar to the asylums so closely associated with his name, Kirkbride aroused strong feelings in others, ranging from profound hostility to deep admiration. Respected and venerated for his accomplishments by his peers, Kirkbride was also reviled by a younger generation of doctors who viewed his extensive influence and stubborn devotion to his beliefs as obstacles to progress in psychiatric medicine. With his patients, Kirkbride aroused enough animosity in one to inspire attempted murder (which Kirkbride narrowly escaped). More often he acquired the admiration, respect, and affection of those he treated. In an extreme example, Dr. Kirkbride actually married a former patient after his first wife passed away. This marriage revealed the depth of Kirkbride's belief that the mentally ill are human beings with much to offer, though suffering from an illness that can be treated and possibly cured. On December 16th, 1883 Dr. Kirkbride died of pneumonia at the age of 74. He was at his home on the grounds of the Pennsylvania Hospital for the Insane.