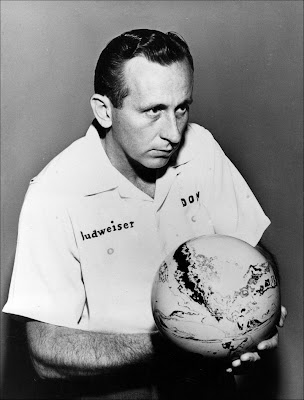 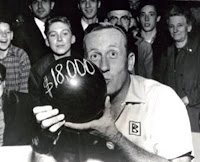 Carter, known as "Mr. Bowling," was the game's original superstar. He became his sport's most recognizable name at a time when alleys were thriving across the country and bowling was starting to assert itself as a fixture on television. Carter was a leading force in the formation of the PBA in 1958 and became a charter member of the PBA Hall of Fame in 1975.


He had a style all his own as he took his steps to the line. With his stooped shoulders and cocked elbow, he made a deep knee bend as he unleashed the ball as if pushing it toward the pins. 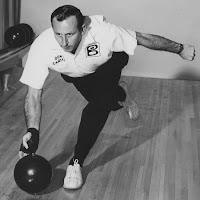 He also did something that no one in baseball, football, or golf ever did. He became the first athlete in American sports history to sign a $1 million marketing endorsement contract, with bowling ball maker Ebonite in 1964.
"It is impossible to put into words what Don Carter meant to the PBA and the sport of bowling," PBA Commissioner Tom Clark said.
The 6-foot, 200-pound Carter bowled five 800 series, 13 perfect games, and six 299s in sanctioned play. He practically held a monopoly on bowling honors. He was voted bowler of the year six times (1953, 1954, 1957, 1958, 1960, 1962).
He served as the PBA's first president. He was inducted into the American Bowling Congress Hall of Fame in 1970.
Carter spent significant time in Toledo, bowling in the ABC, Buckeye Beer, and Ebonite Opens at Imperial Lanes. He always participated in the pro-ams that would help The Blade Good Neighbor Fund, a nonprofit organization which made contributions to deserving charities, particularly in the area of youth welfare.

One of Carter's last appearances in Toledo came in 1991 when he and Toledoan Junior Powell bowled in the 88th ABC championships at the SeaGate Centre.
at 7:27 PM