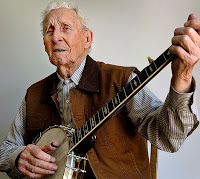 CHARLOTTE, N.C. - Born on a mountain farm near Weaverville, N.C., Wade Mainer soaked up old songs ringing in the far hills and hollers.

As a professional singer and banjo player, he would introduce that music to audiences throughout the nation and also pass it on to new generations of performers.
Mainer, one of the most popular and influential figures in early country music, died Monday at his home in Flint, Mich. He was 104.
Some called him "the godfather of North Carolina country music" and "the grandfather of bluegrass."
He performed in the White House for Franklin and Eleanor Roosevelt and in New York City with folk legend Woody Guthrie.
"He was one of the most remarkable musicians of his era," said music historian Dick Spottswood, author of "Banjo on the Mountain: The First 100 years of Wade Mainer," published in 2010 by the University Press of Mississippi.
"Every picker who knows a little history understands the role Wade Mainer played in preparing the ground for bluegrass. And all who love his music know how well its artistry stands the test of time on its own. He was the spiritual ancestor of today's old-time music that's being taken up by so many kids."
In the mid 1920s, Mainer hitchhiked from Buncombe County to Concord, N.C., where he worked in a cotton mill. Along with his older brother, J.E., Mainer landed on Charlotte radio station WBT's popular "Crazy Water Barn Dance" show in 1934. They became one of the hottest acts in the Southeast, making records for RCA's Bluebird series.
The Mainers' pre-bluegrass versions of such songs as "Maple on the Hill" and "Take Me in the Lifeboat" later became bluegrass standards.
The brothers split in 1936, and Wade Mainer formed the band Sons of the Mountaineers. 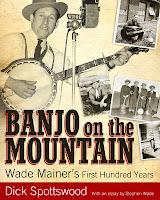 In 1941, American folklorist Alan Lomax arranged for Mainer to join such artists as the Golden Gate Quartet and Josh White to entertain President Roosevelt. Mainer arrived at the White House in bib overalls with a red bandana in his hip pocket.
"I dressed for the farmers of North Carolina," he told the Charlotte Observer in 2003.
In 1944, Mainer sang with Guthrie in the folk musical "The Old Chisholm Trail," a BBC radio play for American troops and English civilians. The cast included folk artists Burl Ives and Cisco Houston, and blues singer Sonny Terry. 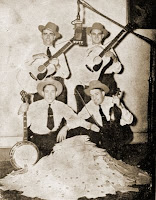 Music experts said Mainer's banjo picking influenced future bluegrass greats like Ralph Stanley and Earl Scruggs.
In 1953, when modern country music began to overshadow old-time, Mainer moved to Flint, where he worked in a General Motors plant for 18 years.
During the folk revival of the 1960s, a younger generation of fans discovered Mainer and the old-time sounds he was again playing. He was popular at bluegrass festivals throughout the '70s, '80s and '90s.
"Wade Mainer's life paralleled those of so many Southerners in the 20th century," said Tom Hanchett, historian at the Levine Museum of the New South. "Raised on a mountain farm, drawn to the city by America's new industrialization, then pulled from the South to the more prosperous North. He was a blue-collar working-man whose music reflected those new worlds, but who never forgot his roots. And that's why his songs resonated with so many people."
Mainer, who was in Michigan's country music hall of fame, debuted on the Grand Ole Opry at age 95.
He returned to North Carolina occasionally. He told the Observer that the mountains where he grew up always lived in the tunes he carried in his heart.
"This is where the music was born," Mainer said.
Mainer is survived by his wife of 73 years, Julia; three sons; a daughter; two grandchildren; three great-grandchildren; and several stepgrandchildren.
The funeral service is Friday at 11 a.m. at Swartz Funeral Home, 1225 W. Hill Road, Flint, Mich. Burial will be in Crestwood Cemetery.
Contributions can be made to Deliverance Tabernacle, G-4089 Fenton Road, Burton, MI 48529; Carriage Town Ministries, 605 Garland St., Flint, MI 48502; or Feed The Children, P.O. Box 36, Oklahoma City, OK. 73101.