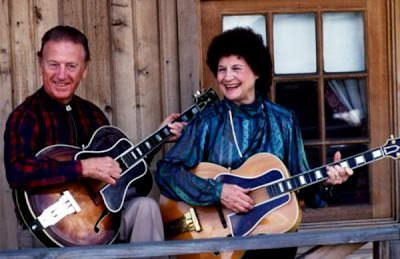 Johnnie Robert Wright — who made significant contributions as a solo artist, a member of innovative duo Johnnie & Jack and, most famously, as the lifelong partner to Queen of Country Music Kitty Wells – died Tuesday morning at his Madison home. He was 97.
With Johnnie & Jack, Mr. Wright introduced Latin rhythms into country music and scored hits included “Ashes of Love,” “Poison Love” and “(Oh Baby Mine) I Get So Lonely.” As a solo artist, Mr. Wright billed himself as “Johnny Wright” and had a No. 1 hit with the Tom T. Hall-penned “Hello Vietnam.” 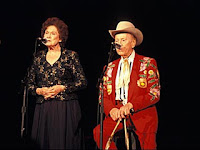 And from the time he married 18-year-old Muriel Deason in 1937, he was an integral part of her career: Mr. Wright gave Deason the stage name “Kitty Wells,” he brought her the landmark hit “It Wasn’t God Who Made Honky Tonk Angels,” he offered her headline status on package shows at a time when females were unfailingly relegated to sub-prime positioning, and he was a constant as a sounding board, business advisor and husband. 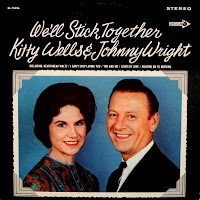 Mr. Wright grew up in Mt. Juliet, at the time a bucolic, country community. As a boy, he listened regularly to WSM’s Grand Ole Opry, wiggling a wire on a crystal radio set to improve the signal. His chief childhood thrill came at when Opry star Uncle Jimmy Thompson would make semi-regular visits to a Mt. Juliet feed store for impromptu performances.

“He had a woman with him called Becky Bruce,” Wright told a Nashville audience in 2000. “Uncle Jimmy had this little old Ford truck, and he’d come in and get this fiddle out. He’d fiddle, and that woman would start dancing… and I’d get out there and start dancing, too.”


Muriel Deason came into the picture when Mr. Wright’s sister, Bessie, married and moved in next door to the Deason family in Nashville. Five years’ Deason’s senior, Mr. Wright was smitten when he heard the teenager sing and play guitar. She was impressed by his musicianship and by the fact that he owned a car.
“I had a Chevrolet, probably a 1931, and we’d ride around down on First Street and look at the river. Back then, the river wasn’t near as wide as it is today.”
They married on Oct. 30, 1937. Deason had just turned 18, and Mr. Wright worked at the Davis Cabinet Company, making $13 a week. Deason made less than that, folding and ironing shirts at the Washington Manufacturing Company to help make ends meet. 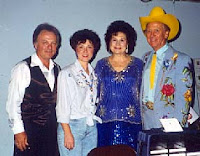 In 1938, Mr. Wright's duo partner, Jack Anglin, married Mr. Wright’s sister, Louise, who sang backing vocals with Deason as “Johnnie Wright & The Harmony Girls” on WSIX radio in Nashville. Soon, Mr. Wright was performing with Anglin as Johnnie & Jack, with Deason on harmony vocals. Anglin’s military stint halted that, and Mr. Wright worked for a time as a band leader, hiring young Chet Atkins to play fiddle. (Atkins would later become known as one of country music’s greatest guitarists.) Upon Anglin’s 1946 discharge, Johnnie & Jack was back in business, working at a radio station in Raleigh, N.C. The duo’s recording career began in 1947, the same year the group was offered a place on the Grand Ole Opry (they soon left the Opry in favor of the Louisiana Hayride show).
The 1951 Johnnie & Jack hit “Poison Love” brought a Latin beat into country and landed at #4 on the country chart. Calypso-tinged “Cryin’ Heart Blues” followed, another Top 10 hit. A direct line may be drawn from “Poison Love,” “Cryin’ Heart Blues” and other Johnnie & Jack songs to the south-of-the-borderish contemporary country successes of Kenny Chesney.

In 1952, Deason was working, though sporadically, as “Kitty Wells,” a name Mr. Wright drew from the folk ballad, “Sweet Kitty Wells.” She had decided to give up her professional singing in favor of full-time homemaking. Hank Thompson’s “Wild Side Of Live” was a 15-week No. 1 hit that year, and a songwriter named J.D. Miller had penned an “answer” song called “It Wasn’t God Who Made Honky Tonk Angels.” The original song blamed faithless women for relationship problems. Miller’s answer ballad turned the tables, with lyrics like “Every heart that’s been broken/ Was because there always was a man to blame.”
Decca Records’ Paul Cohen was at a Johnnie & Jack show at the Ernest Tubb Record Shop on Broadway in 1952, and he spoke to Mr. Wright about a new song that might be good for Kitty Wells. Deason was reluctant to sing it at first, but the 33-year-old wife and mother was swayed by the $125 payment she would receive for recording. Mr. Wright played an aluminum bass on in the studio on “It Wasn’t God Who Made Honky Tonk Angels,” and the song soon topped the charts, selling more than 800,000 copies in its initial release and crossing over into the pop music Top 40.
Suddenly, Kitty Wells was the hottest act in the family. And Mr. Wright offered her top billing in shows, knowing she could pull in ticket-buyers as the main attraction. Superstar Roy Acuff was among those who advised Mr. Wright against allowing a woman such a place of professional prominence.
“He said it wouldn’t work,” Mr. Wright told The Tennessean. “But it did work.”
Indeed, Wells became known as The Queen of Country Music, and she was the top female country star of her generation. In 1976, she was elected to the Country Music Hall of Fame.
Johnnie & Jack remained a chart force through most of the 1950s, though things cooled after 1958’s Top 10 “Stop the World (And Let Me Off).” In 1960, Mr. Wright was the organizational force behind a package show that spotlighted Wells and also featured Johnnie & Jack. He called in young steel guitar player Johnny Sibert for an audition.
“Johnnie offered me the position,” Sibert said. “But he said, ‘I’ll let you know, in a few years I’ll be 50-years-old, and we’re going to hang it up and retire.”
In fact, Mr. Wright and Kitty Wells performed up until the last day of 2000.
Upon moving to Decca in 1961, Mr. Wright noticed that the label had misspelled his name as “Johnny” on a single. Figuring “Johnny” was easier to spell, he kept the spelling from that point forward.
In 1963, Anglin died in a one-car crash on the way to a funeral service for Patsy Cline, Hawkshaw Hawkins, Cowboy Copas and Randy Hughes. Mr. Wright worked as a solo act after that, notching his only No. 1 single in 1965 with “Hello Vietnam.” He continued to tour with the Kitty Wells Family Show, which included son Bobby Wright. Much later, in 1995, Mr. Wright and Wells brought fiddler Eddie Stubbs to town to perform with them, Bobby Wright and the Tennessee Mountain Boys band. Stubbs would become a famed air personality, broadcasting a nightly show on WSM and serving as a Grand Ole Opry announcer, and he marveled at Mr. Wright and Wells, both as performers and as a couple.
“There are celebrity marriages that don’t even last 72 days now,” Stubbs said at Wells’ 90th birthday party, in 2009. “This is possibly the longest celebrity marriage in history.”
Part of the reason the marriage lasted was that Mr. Wright put in plenty of work. A good mechanic, he was often called upon to fix engine problems with the tour bus. On that bus, Mr. Wright slept on a top bunk, reserving the bottom bunk for The Queen. No telling the number of miles, the number of songs, the fatigue or the number of hands that clapped together in appreciation for the songs and sounds and memories.
Mr. Wright gave of himself through his music, through his promotional efforts on Kitty Wells’ behalf, and through thousands of kindnesses: an autograph here; patching a radiator hose here, on the side of some highway; complimenting his wife, or hanging another knick-knack up in her country kitchen. In exchange, he received a place in the history books, and a marriage that lasted more than 73 years.
At the dawn of the new century, as he and Wells retired from the road (though they kept the tour bus parked in the driveway, just in case), Mr. Wright was already prepared to call the whole thing a success.
“It’s been a good, joyful life,” he said, sitting on his couch in Madison, as Kitty Wells turned to him and smiled.