Jerry Leiber of songwriting team Leiber and Stoller dies at 78

Jerry Leiber, who with his songwriting partner Mike Stoller created a songbook that infused the rock 'n' roll scene of the 1950s and early '60s with energy and mischievous humor, has died. He was 78.
Leiber, the words half of the duo, died Monday at Cedars-Sinai Medical Center in Los Angeles of cardiopulmonary failure, said Randy Poe, president of the songwriters’ publishing company. 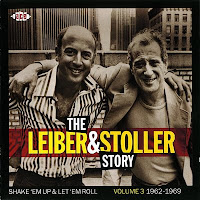 Inducted into the Songwriters Hall of Fame in 1985 and the Rock and Roll Hall of Fame in 1987, Leiber and his lifelong writing partner, Stoller, wrote hits that included Elvis Presley's rat-a-tat-tat rendition of "Hound Dog" in 1956 and Peggy Lee's 1969 recording of the jaded "Is That All There Is?"
But they may be best remembered for the ebullient, impudent hits written for the Clovers ("Love Potion No. 9"), the Drifters ("Ruby Baby"), the Cheers ("Black Denim Trousers and Motorcycle Boots"), the Robins ("Smokey Joe's Cafe," "Riot in Cell Block No. 9") and, especially, a Robins' spinoff group that Leiber and Stoller helped create, the Coasters ("Searchin'," "Yakety Yak," "Poison Ivy," "Charlie Brown," "Down in Mexico," "Little Egypt").


As Leiber-Stoller biographer Robert Graham wrote, the Coasters' songs "were arguably the most enduring and hands-down funniest records of the rock ‘n' roll era."
With their sassy lyrics and playful melodies, the songs liberated American teenagers to enjoy their youth and poke fun at their elders.
"They corrupted us with pleasure," critic and author John Lahr wrote of the songwriters in the introduction to Graham's "Baby, That Was Rock & Roll: The Legendary Leiber and Stoller" (1978). "Dancing and laughing, we came of age to their songs."
Dozens of other artists have recorded Leiber and Stoller songs: the Beatles, Jerry Lee Lewis, Buddy Holly, Fats Domino, the Everly Brothers, Barbra Streisand, Edith Piaf, the Rolling Stones, Aretha Franklin and more. The songwriters' most oft-recorded tune is the laid-back, bluesy "Kansas City," which has been sung by such performers as Little Willie Littlefield in 1952 (as "KC Lovin'"), Wilbert Harrison, whose 1959 hit with it is probably the best-known, and Paul McCartney in the late 1980s.
In 1995, a musical based on Leiber and Stoller songs, "Smokey Joe's Cafe," opened on Broadway and ran for more than 2,000 performances.
at 7:51 PM