Artisan of LSD dead at 76

Owsley Stanley, Artisan of Acid, Is Dead at 76 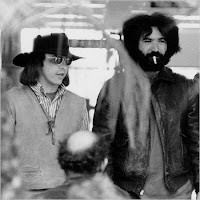 Owsley Stanley, the prodigiously gifted applied chemist to the stars, who made LSD in quantity for the Grateful Dead, the Beatles, Jimi Hendrix, Ken Kesey and other avatars of the psychedelic ’60s, died on Sunday in a car accident in Australia. He was 76 and lived in the bush near Cairns, in the Australian state of Queensland. Enlarge This Image Rosie McGee, via Reuters Owsley Stanley, left, with Jerry Garcia of the Grateful Dead in a 1969 publicity photograph. Mr. Stanley was a financial backer of the Dead and also provided the band with a supply of LSD. His car swerved off a highway and down an embankment before hitting trees near Mareeba, a town in Queensland, The Associated Press reported. Mr. Stanley’s wife, Sheilah, was injured in the accident. Mr. Stanley, the Dead’s former financial backer, pharmaceutical supplier and sound engineer, was in recent decades a reclusive, almost mythically enigmatic figure.


He moved to Australia in the 1980s, as he explained in his rare interviews, so he might survive what he believed to be a coming Ice Age that would annihilate the Northern Hemisphere. Once renowned as an artisan of acid, Mr. Stanley turned out LSD said to be purer and finer than any other. He was also among the first individuals (in many accounts, the very first) to mass-produce the drug; its resulting wide availability provided the chemical underpinnings of an era of love, music, grooviness and much else. Conservatively tallied, Mr. Stanley’s career output was more than a million doses, in some estimates more than five million. His was the acid behind the Acid Tests conducted by the novelist Ken Kesey and his Merry Pranksters, the group of psychedelic adherents whose exploits were chronicled by Tom Wolfe in his 1968 book “The Electric Kool-Aid Acid Test.” The music world immortalized Mr. Stanley in a host of songs, including the Dead’s “Alice D. Millionaire” (a play on a newspaper headline, describing one of his several arrests, that called him an “LSD Millionaire”) and Steely Dan’s “Kid Charlemagne.” So widely known was Mr. Stanley that he appears in the Encyclopedia Britannica article on LSD under the apparently unironic index term “Augustus Owsley Stanley III (American chemist).” The Oxford English Dictionary contains an entry for the noun “Owsley” as “an extremely potent, high-quality type of LSD.” In 2007, Mr. Stanley was the subject of a long profile in an issue of Rolling Stone magazine commemorating the 40th anniversary of the Summer of Love. In short, Mr. Stanley lent the ’60s a great deal of its color — like White Lightning, Monterey Purple and Blue Cheer, the varieties of his LSD that were among the most popular. (He did not, contrary to popular lore, release a product called Purple Haze; in interviews, he sounded quite miffed that anything emerging from his laboratory could be thought to cause haziness rather than the crystalline clarity for which he personally vouched.) He also lent the era much of its sound, developing early, widely praised high-fidelity sound systems for live rock concerts, including the Dead’s towering “wall of sound.” Mr. Stanley was previously a ballet dancer and a member of the United States Air Force. Augustus Owsley Stanley III was born on Jan. 19, 1935, to a patrician Kentucky family. His paternal grandfather, for whom he was named, was a congressman, governor of Kentucky and United States senator. (Somewhat prophetically, given his grandson’s future pursuits, the elder Mr. Stanley was a vigorous public foe of Prohibition.) Young Owsley, whose adolescent hirsuteness caused him to be known ever after as Bear, was sent to a military preparatory school in Maryland. He was expelled in the ninth grade for furnishing the alcohol that, as he told Rolling Stone in 2007, had nearly all his classmates “blasted out of their minds” on homecoming weekend. He briefly attended the University of Virginia before enlisting in the Air Force, where he learned electronics. He later worked in Los Angeles as a broadcast engineer for radio and television stations. He also studied ballet and for a time was a professional dancer. In 1963, Mr. Stanley enrolled at the University of California, Berkeley. The next year, he encountered LSD, a transformative experience. “I remember the first time I took acid and walked outside,” he said in the Rolling Stone interview. “The cars were kissing the parking meters.” Mr. Stanley had found his calling, and at the time it was at least quasi-legitimate: LSD was not outlawed in California until 1966. What he needed to do was learn his craft, which he accomplished, as Rolling Stone reported, in three weeks in the university library, poring over chemistry journals. Soon afterward, he left college and a going concern, the Bear Research Group, was born. In 1965, he met Mr. Kesey, and through him the Dead. Enraptured, he became their sound man, early underwriter, principal acolyte, sometime housemate and frequent touring companion. With Bob Thomas, he designed the band’s highly recognizable skull-and-lightning-bolt logo.

Mr. Stanley also made many recordings of the Dead in performance, now considered valuable documentary records of the band’s early years. Many have been released commercially. Mr. Stanley remained with the band off and on through the early ’70s, when, according to Rolling Stone, his habits became too much even for the Grateful Dead and they parted company. (He had insisted, among other things, that the band eat meat — nothing but meat — a dietary regimen he followed until the end of his life.) His other clients included John Lennon, who, according to “The Beatles,” a 2005 biography by Bob Spitz, contracted to pay Mr. Stanley for a lifetime supply of his wares. In 1970, after a judge revoked Mr. Stanley’s bail from a 1967 drug arrest, he served two years in federal prison. There, he learned metalwork and jewelry making, trades he plied in recent years. Mr. Stanley, who became an Australian citizen in the 1990s, was treated for throat cancer in 2004. In the Rolling Stone interview, he attributed his survival to his carnivorous diet. (A heart attack he had suffered some years earlier he ascribed to eating broccoli as a child, forced on him by his mother.) Besides his wife, Sheilah, Mr. Stanley’s survivors include two sons, Pete and Starfinder; two daughters, Nina and Redbird; eight grandchildren; and two great-grandchildren.

Though he helped transform the culture, Mr. Stanley asserted that he had never meant to do so. As he told The San Francisco Chronicle in 2007, he had set out only to make a product he knew he could take, because its ingredients were known. “And my friends all wanted to know what they were taking, too,” Mr. Stanley said. “Of course,” he added “my ‘friends’ expanded very rapidly.”
at 8:13 AM