Josh Anderson/The New York Times
Thornton Dial in his studio in Bessemer, Ala.
Letting His Life’s Work Do the Talking

THORNTON DIAL has never been one for talking much about his artwork. Ask him what inspires his monumental assemblages, made from twisted metal, tree branches, cloth, plastic toys, animal bones and all manner of found materials, and he is likely to respond tersely, as he did while showing me around his studio here one bone-chilling day last month.

“I mostly pick up stuff,” he said. “I start on a picture when I get a whole lot of stuff together. And then I look at the piece and think about life.”

Now 82, Mr. Dial has had a lot of life to think about — especially over the last year, during which he endured hernia surgery, pneumonia, a stroke and heart problems. Only recently did he return to making art in this cold and cavernous space at the back of Dial Metal Patterns, a fabrication shop run by his children. As he huddled in a chair, looking frail and slightly wary, his three sons hovered about him protectively. 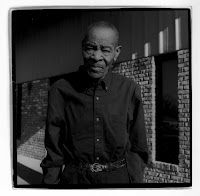 For one paintinglike piece, made on canvas-covered plywood, Mr. Dial had used branches, metal, clothing, paint and a pair of work boots to create a lean figure fording through a tall jungle. “That’s Obama,” he said. “I show the struggle he got through without getting bit.”

Another, saturated with powdery white pigment, presented a baby doll nested in a field of cotton-covered twigs and twisted steel. A rope encircled the doll’s neck, suggesting a noose or an umbilical cord. “That’s the way they come,” Mr. Dial said, chuckling, when asked about the rope’s significance. “You probably see many things in my art if you’re looking at it right.” 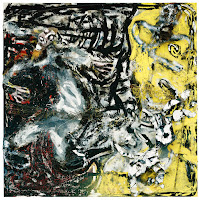 Because Mr. Dial is self-taught and illiterate, he has generally been classified as a folk or outsider artist. But that pigeonhole has long rankled his admirers, because his work’s look, ambition, and obvious intellectual reach hew so closely to that of many other modern and contemporary masters, from Jackson Pollock and Robert Rauschenberg to Jean-Michel Basquiat. “If anybody else had created a major opus of this scope,” said Joanne Cubbs, an adjunct curator at the Indianapolis Museum of Art, “he or she would be recognized as a major force in the art world. Instead Dial struggles at the margins.”

But his marginalization may not last much longer. Mr. Dial’s first career retrospective, “ Hard Truth,” opens at the museum in Indianapolis on Friday. And on March 19 the Andrew Edlin Gallery in Chelsea will open Mr. Dial’s first solo gallery show in New York in 11 years. “This feels like the moment when the cultural world is ready to understand Mr. Dial and perhaps to embrace him,” said Ms. Cubbs, who organized the museum survey. 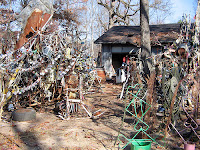 That exhibition, which runs through Sept. 18 before traveling to New Orleans; Charlotte, N.C.; and Atlanta, includes examples from many different periods, starting with the pictures that made Mr. Dial’s name in the early ’90s, when he used the tiger to symbolize the struggles and triumphs of African-American life. He has continued to invoke the specter of slavery, in pieces like “High and Wide (Carrying the Rats to the Man),” a large 2002 construction in which a grinning Mickey Mouse toy is chained to the hull of a ship.

The show also includes work he made in response to the 2001 World Trade Center attack and the gulf war: sculptures like the monumental “Crosses to Bear (Armageddon),” dated 2001-4, in which a nine-foot-high expanse of rusty iron crosses is festooned with rag and rubber detritus; and paintings that appear to be made from torn and bloodied American flags, like “Don’t Matter How Raggly the Flag, It Still Got to Tie Us Together” (2003).

“The power and clarity of his work measures up to any artist of any color in the last decades,” said Maxwell L. Anderson, the director of the museum, noting the works’ superficial resemblance to those by Julian Schnabel and Anselm Kiefer. “But unlike those figures this work is imbued with an experiential dimension. For Dial, politics is personal.”

Certainly Mr. Dial has one of the more amazing art historical biographies on record. Although he had little formal schooling, he developed an intimate acquaintance with postmodernist art-making materials early in life.

Born in 1928 in a cornfield in the tiny rural hamlet Emelle, Ala., and raised by his great-grandmother, Mr. Dial went to work as soon as he could walk, harvesting sweet potatoes and corn, and gathering twigs and “the stuff my great-grandmother needed to make fire,” he said. After her death Mr. Dial and his younger half brother went to live with another relative in Bessemer, a small industrial town, where he hauled ice, poured concrete, raised cattle, did carpentry and laid bricks, among other things, until he found employment as a metalworker at the local Pullman-Standard boxcar factory. He worked there on and off until it closed in 1981.

All the while — throughout his long marriage to Clara Mae Murrow, who died in 2005, and the birth of his five children (one daughter died at 28 from cerebral palsy) — Mr. Dial was quietly observing and honing his skills. “I was just watching people that make stuff,” he said. “I watch everything.” 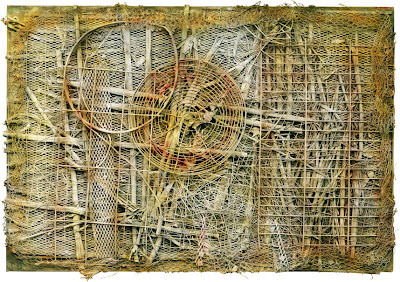 He was also making things himself, from the functional, like fishing nets and lures, chimneys, bricks, funerary monuments, furniture and houses (“I made a whole lot of them and tore them down,” Mr. Dial said) to the less obviously useful, like animal sculptures made from tin and tree branches or plastic bread wrappers, or a slave ship built from metal and wood. As his sons recalled, during another interview in the shop office with nearly a dozen relatives and family friends in attendance, Mr. Dial would come home from work, watch the evening news, do some farming out back with his children and then set to work making things again.

Even with something ostensibly practical like a lure, “it was odd, the way he took his time and painted them and stuff like that,” his son Richard said. “Whatever he worked on had to be different from somebody else.” Mr. Dial was so prolific, he added, that his wife often made the boys tidy up by burying his old work in the yard. (Mr. Dial has said in the past that he sometimes hid his work himself because he feared the attention it might attract during the Jim Crow years.)

Life changed dramatically for Mr. Dial in the late ‘80s, when he was discovered by William Arnett, a wealthy white Atlanta collector who was obsessively scouring the South for unheralded African-American work. (Among his discoveries are the Gee’s Bend quilters, whose work toured to 12 museums in a widely lauded show.)

Mr. Arnett was smitten from the start. “Dial possessed a combination of pride, dignity and determination, along with a wry sense of humor,” he wrote in an e-mail. “His earliest artworks demonstrated an unlimited creative imagination. All he lacked was encouragement and opportunity.”

For Mr. Dial the meeting was transformative. “He didn’t have to bury stuff anymore,” his son said, “because Mr. Arnett would give him money for things, and Daddy was kind of fascinated. There was a point where he said, ‘Ya’ll been laughing at me, but look at what the man just paid me for doing this.’ ”

Or, as Mr. Dial put it, “That’s the time I did start thinking about art.”

Mr. Arnett gave him a monthly stipend in exchange for right of first refusal, which allowed Mr. Dial to make art full time. Mr. Arnett visited frequently, and introduced Mr. Dial to curators and other collectors, including Jane Fonda, who remains a major supporter. He also set the wheels in motion for Mr. Dial’s first museum exhibition, “Image of the Tiger.” Organized by the critic Thomas McEvilley, it opened at two New York institutions, the Museum of American Folk Art and the New Museum of Contemporary Art, in November 1993. The show seemed poised “to break down the border between outside and inside,” Mr. McEvilley said. Critically it was successful: “He has a genuine talent that he brandishes fearlessly,” Roberta Smith wrote in The New York Times. But soon after the opening “60 Minutes” ran a segment that suggested Mr. Arnett was exploiting the folk artists whose work he had championed, particularly Mr. Dial. Suddenly “my show died on the vine,” Mr. McEvilley said. And so did several other major exhibitions of Mr. Dial’s art in the works.

Since then, although Mr. Dial has exhibited in galleries and been included in many group outsider art shows, as well as the 2000 Whitney Biennial, he has had only one other major museum solo exhibition, “Thornton Dial in the 21st Century,” at the Museum of Fine Arts Houston in 2005. (Mr. Dial, who remains close to Mr. Arnett, memorialized the debacle with the 2003 self-portrait assemblage “Strange Fruit: Channel 42”: it involves an eyeless scarecrow-like creature wearing a bloody tie strung up from a television antenna.) Yet the event had one positive effect on Mr. Dial, Ms. Cubbs said: “It made him re-evaluate what the relationship would be between his art and its audience, and his work became more complex and powerful.”