Interesting read on the ethics and morality of inmates profiting from the sale of their art. I have no opinion on this matter at all. 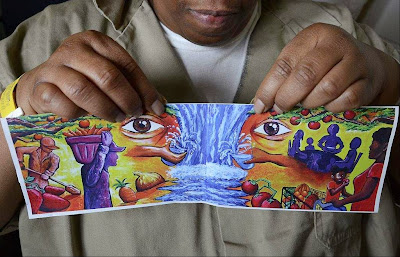 The art world often nurtures its enfants terribles. After all, rule breakers sell paintings. So it's no surprise that real felons are increasingly winning notice on the scene. As therapeutic art programs burgeon behind bars, "criminal art" has generated a curious niche in the U.K. This autumn, London's prestigious Southbank Centre will turn over its gallery space to works by Britain's inmates. The show, Art by Offenders (Oct. 21–Dec. 3), is organized by the Koestler Trust, a charity that awards convicts with small cash prizes and a cut of any work sold. The show will be curated by female prisoners on special supervised release who will give tours of the exhibit to the public. In a display at the Edinburgh Festival, also titled Art by Offenders (through Sept. 4), works by Scotland's inmates reveal a daring contemporary streak. One giant train made from thousands of matchsticks could out-kitsch Jeff Koons. 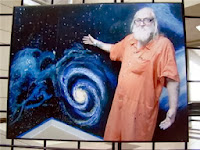 In other pieces, the claustrophobia of prison life is palpable; an anonymous painting titled Full House shows a crowded mass of uniformed figures, representing Britain's swelling prison population. In a work called Vortex, one of the potential exhibits in London, a futuristic swirl of color is splattered with red, blood-like paint. Another piece, entitled My World in Winter, is an abstract Peter Doig–style picture that evokes the gritty texture of the prison yard.
The lack of access to materials clearly inspires innovation. "It is interesting what styles emerge," says Ally Walsh, an art manager at the Anne Peaker Centre for Arts in Criminal Justice in London. "Some [inmates] might have had no exposure to contemporary art. But what they're making is naive and abstract art." 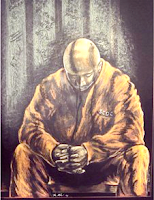 Therapeutic art programs are widely believed to help rehabilitate criminals. Now they're also generating controversial interest from critics and private collectors. Earlier this year, two paintings by London's notorious Kray twins-—who ran a violent gang called "the Firm" during the 1960s, were convicted of murder, and have since died—netted nearly £1,000 apiece when they went under the hammer at a London auction house. Another lot of eight Kray artworks sold by a former prison officer's daughter—including watercolor landscapes and a self-portrait by one of the brothers titled Ron & Reg in Top Hat & Tails—fetched a total of £17,500 at an auction house in Hampshire, England. "[People] imagine that the underworld might be revealed by having access to this work," says Walsh. "Suddenly the taboo life of people in prison is available to the public. Even if it's not to fully understand [it], it's just an attempt to try and glimpse that world. That desire is very compelling. That's what's driving this market."


The growing demand has sparked a contentious ethics debate in the U.K. Should convicted murderers be allowed to use government funds to become professional artists while they serve life sentences? To be sure, censoring the work of murderers would discount several of history's most talented artists—including Caravaggio, who killed a man in a brawl in 1606. Tim Robertson, director of the Koestler Trust, believes convicts should be encouraged to exhibit art made during their incarceration. "On the whole, it's to the benefit of all of us that the work is exhibited," he says. "It is a way of rebuilding [a prisoner's] relationship with society. Some of these prisoners are creating amazingly skilled work. By exhibiting it, you get to hear their perspectives. The majority of the public have no idea what's happening [inside prisons]. They are grim places. My God, they're grim." Opponents argue that displaying and selling criminal art celebrates some of society's most violent sociopaths. Her Majesty's Prison Service was so concerned about the controversial nature of this story that all information given to NEWSWEEK had to have ministerial clearance.
It's not hard to see why the vogue for art by offenders has left the Home Office uneasy; in April, The Times of London revealed that an origami sculpture purchased for £600 by London's Royal Festival Hall for display in the lobby was the work of the convicted sex murderer Colin Pitchfork. The families of the two teenage girls he murdered objected, and even art critics—more accustomed to defending the autonomy of artists at any cost—backed off from the debate. The clever tableau of an orchestra crafted from a folded score of Beethoven's Ninth Symphony, titled Bringing Music to Life, was promptly removed from display, inspiring the usually liberal Guardian arts blog to run the headline GOOD RIDDANCE TO COLIN PITCHFORK'S ARTWORK. But the work itself had already been admired by the droves of Londoners who pass through the Festival Hall's lobby each day.
Some serious offenders have established popular followings. One British detainee, Michael Gordon Peterson, who has assumed for himself the name of tough-guy actor Charles Bronson, is the subject of a recent biopic, and is a prolific artist with more than a dozen Koestler awards. Bronson was convicted of armed robbery in 1975, then staged a one-man protest by taking hostages and assaulting guards. The former bare-knuckle fighter has been in solitary confinement for the past 30 years and received a life sentence while in jail after he took his art teacher hostage in 2000. Yet his colorful, often comic cartoons depicting his precarious state of mind continue to attract buyers online. This summer the Welsh charity the Beacon of Hope sold two of his works for more than £700 after Bronson donated them to the trust. The charity is quick to point out Bronson's good intentions as a clear sign that a once violent man is changing his ways. Others counter that Bronson and his inflated criminal ego have no right to enter the rarefied sphere of public art.
So-called outsider art has been fashionable for some time, but the question of profit is clearly troubling the government, which is currently reviewing a section of the coroners-and-justice bill to empower the courts to seize assets from offenders who have made money from their crimes. The section of the bill has become known as the criminal-memoirs law but would apply to all means of expression, including visual art, poetry, and fiction. A Ministry of Justice spokesman stated that criminals should not be allowed to "cash in on the story of their crime."
But prison art appears to adhere to the same principles as all commercially driven art: namely, market forces trump all. And there's clearly a consumer demand for criminal art. Ronnie Kray's Munch-like landscapes with menacing figures standing outside bleak buildings sold in spite—or perhaps because—of his conviction for murder, racketeering, and torture. What's more, the auction was a spectacle, attracting serious aficionados as well as ne'er-do-wells from the Krays' sketchy past. "Some of the crowd you were afraid to speak to; others were collectors," says Paul Smith of the Hampshire auction house. "It didn't matter that the work wasn't any good. There was a morbid fascination all round." As admirers of artists from Francis Bacon to Edvard Munch can attest, few things are more alluring than the vision of a dark mind hanging on the wall.
at 5:35 PM