As the godfather of Nashville songwriters, Guy Clark has survived more than forty years of late-night partying and arduous touring—and suffered the loss of those he loved most. Yet somehow his genius is as sharp as ever.

Photographs by Wyatt McSpadden
The title track to Guy Clark’s most recent album, My Favorite Picture of You, may be the finest song he’s ever written. This is no small feat. For one thing, there’s his catalog to consider. Guy wrote “L.A. Freeway,” one of American music’s greatest driving songs and the final word for small-town troubadours on the false allure of big cities. His lyrical detail in “Desperados Waiting for a Train” and “Texas, 1947” presents a view of life in postwar West Texas that is as true as Dorothea Lange’s best Dust Bowl portraiture. When he wrote about the one possession of his father’s that he wanted when his dad died in “The Randall Knife,” he made a universal statement about paternal love and respect. Bob Dylan lists Guy among his handful of favorite songwriters, and most of Nashville does too.
And then there’s the equally significant matter of his timing. Those songs were written in the seventies and eighties, when the hard-living coterie of Guy, Townes Van Zandt, and Jerry Jeff Walker was inventing the notion that a Texas singer-songwriter practiced his own distinct form of artistry, creating the niche in which disciples like Lyle Lovett, Steve Earle, and Robert Earl Keen would make their careers. Yet Guy penned “My Favorite Picture of You” a mere three years ago, just after turning 69, an age to which most of his contemporaries had chosen to coast, provided they were still living at all. 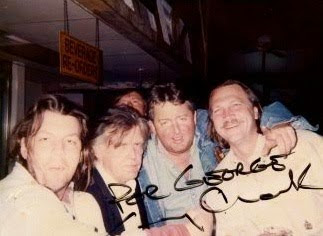 
The song originated the way most of them do, with a line. A friend, Gordie Sampson, came to write at Guy’s West Nashville home and brought a hook list with him, a page of potential lines and titles. The two reviewed the list in Guy’s basement workshop, where he splits his time between writing and building guitars, sustaining himself on black coffee, peanut-butter crackers, hand-rolled cigarettes, and an occasional toke of boo. One wall is covered with shelves that hold some 1,500 cassette tapes of demos, live shows, and friends’ albums, and another wall holds luthier tools. The rest of the room is cluttered with the ephemera of his life, some of it stored in little clementine orange crates, the remainder hanging on the walls and scattered on tables. Guy is endlessly loyal, and each item carries a specific sentimental tie. There’s a tight portrait of Van Zandt taken by their friend Jim McGuire. A cane that artist Terry Allen found for him in Santa Fe. Every last piece of a fiddle that Guy smashed on a mantel in a drunken fit forty years ago and still means to repair. And on a stand-up table along the back wall, the actual Randall knife, along with others sent in by fans and a letter of thanks signed by the knife maker himself.
Guy sat across from Sampson at a workbench in the center of the room. A tall man with regal posture, he’s got an angular white mustache and soul patch, wavy gray hair that curls up at his collar, and a woodblock of a forehead that looms over deep-set blue eyes. His general expression is that of someone who’s thinking about something more important than you are. Or at least more interesting.
One line on the list jumped out at him: “my favorite picture of you.” He pointed past Sampson to a thirty-year-old Polaroid of his wife, Susanna, pinned on the wall behind a drill press, a photo taken back when she and Guy were Nashville’s king and queen. In those days the first advice new songwriters heard when they moved to Music City was to find Guy and Susanna. And once young guns like Earle and Rodney Crowell made their way to the nonstop picking party at the Clarks’ kitchen table, their goal quickly became twofold: write a song that Guy dug and find a woman like Susanna. She was gorgeous, with long brown hair and dark bottomless eyes. But her attraction was something more: she was uncompromising, indomitable. A painter and songwriter herself, she insisted budding artists place their craft at the center of their lives, just as she and Guy had. When Guy had started thinking about writing songs as a career in the early seventies, she challenged him to quit his day job at a Houston television station and move to Los Angeles, where they’d live for a year before settling permanently  in Nashville. She was smart and cocky but also funny. She started writing songs on a how-hard-could-it-be lark to gig Guy, and then she got cuts. And after Emmylou Harris and Kathy Mattea made the charts with her songs, she liked to tell people, “Guy writes the classics, and I write the hits.” 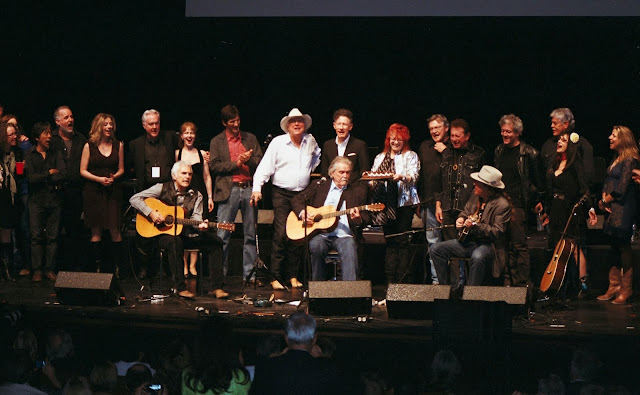 Guy's 80th b-day show at the Paramount in Austin

But the Susanna Clark living upstairs when Sampson came to write scarcely resembled that woman. In the early 2000’s, reeling from the twin defeats of a debilitating back condition and the early death of her and Guy’s best friend, Van Zandt, she’d taken to bed. Though she eventually quit drinking, she upped her intake of pain pills to a point beyond lucidity, seldom leaving the bedroom or changing out of her white cotton nightgown. Then came lung cancer and her refusal to stop smoking. Through much of that time, until his own health turned south, Guy was her sole caregiver. When he went to the basement to work, she’d call on his cellphone and ask him to cook for her or sit and keep her company as she moved in and out of reason. On his walk to the stairs, he’d pass by that Polaroid. It was taken, he told visitors, one afternoon when he and Van Zandt were day-drunk and acting like assholes. She’d had enough and was ready to get as far from the two of them as she could. She stands center frame, arms crossed, glaring at the camera like she might make the photographer’s head combust.
Sampson’s line could only refer to that photo. Guy started into his writing ritual, spreading out sheets of draftsman’s graph paper and grabbing one of the music chart pencils he orders special from California. Methodically, he wrote in all caps, giving each letter its own box on the page.